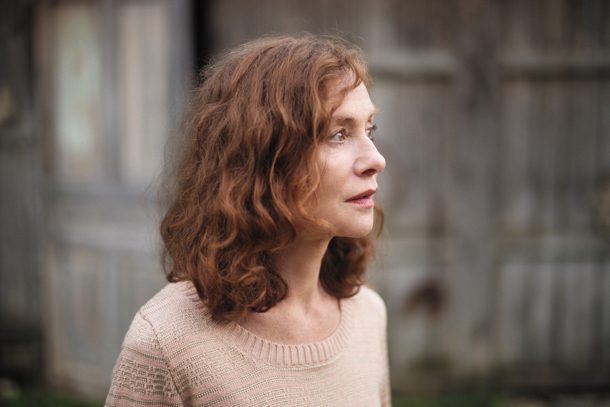 Nathalie is a philosophy teacher in Paris. Happily married to another intellectual, she has a full life with two kids and a possessive mother to take care of. But gradually, in her sixties, her life starts to unravel.

French auteur Mia Hansen-Love’s fifth feature could almost be mistaken for a film by Eric Rohmer with its themes of philosophy, ménage à trois and the infinite cycle of love and life. Appropriately she casts Isabelle Huppert in the leading role which she plays with her usual elegance and panache. Taking life in her stride she encourages her pupils in provocative thought, whisks up a delicious family lunch and rushes to her petulant mother’s bedside to dole out tisanes and sympathy at 5 in the morning.

In all this she suddenly finds herself alone when her husband Heinz (Andre Marcon) announces his departure to leave their airy Parisian apartment to live with a younger woman. Crucially she keeps on going nonchalently; a towering figure of strength and compassion in a world where she is needed but not always valued. Insightfully, Hansen-Love spots she important things she will miss: her husband’s family seaside home where she loves to swim and relax, surrounded by books and beautiful sunsets, but she is still grounded in her Paris home; a salient fact that Hansen Love flags up – a woman’s home is more important to her than an outworn relationship. Nathalie’s ageing mother, Yvette (the immensely attractive, Edith Scob) finally agrees to move to an expensive nursing home and Heinz is seen walking in town with his girlfriend. The tone is upbeat and matter of fact: Hansen-Love and Huppert treat this all with a light-hearted derision.

Sex and romance take a back seat in L’AVENIR and this is the only criticism of the film: to assume that a woman in her early sixties is content to be absorbed into her children and grandchildren at such a young age, is simplistic and questionable but this dimension is glossed over here. Although Nathalie recoils from an approach from a young would-be suitor in the cinema one night; further exploration of her emotional (and sexual) needs, beyond the intellectual ones, could have added further texture to bring this drama into the 21st century. Cleverly Huppert identifies herself as an empowered woman, open to choices, allowing herself moments of grief and laughter at the absurdity of it all. Vulnerability is not dealt with here, although it may be locked away somewhere in her character’s psyche.

If Nathalie’s does have some emotional life it’s will with a good-looking and younger pupil, Fabien (Roman Kolinka), who offers to look after Yvette’s cat whom she visits in the a communal mountainside chalet in the Grenoble countryside. This episode is a clever vehicle for examining alternative ways of surviving financially for those whose passion is to be creative. But those hoping for a sex-fuelled spring /winter romance will be disappointed, and rightly so, this realist and well-crafted vision if about a woman taking control; empowered by force of circumstance, to re-invent herself once her biological imperative ceases to count. MT