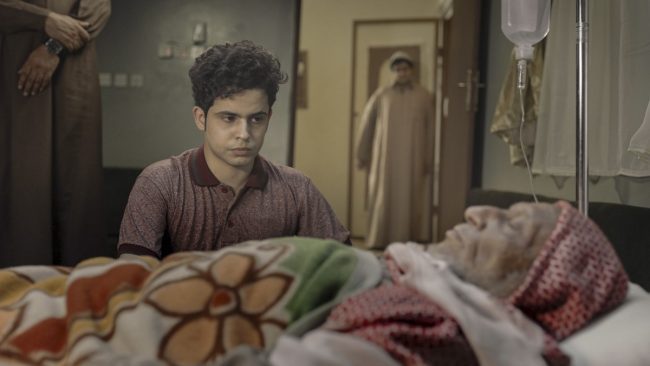 Times are changing in Riyadh. Abdulmohsen Aldhabaan’s realist portrait of father and son conflict serves as a moving metaphor for the underlying clash between past and present in the Arab world.

Nasser (Alquess) is a respectable middle-aged business man who has moved with the times in Riyadh. His teenage son Waleed (Alfahad) is introvert, sullen and – like most teenagers – critical of his father. But his grandfather’s sudden illness causes him to take stock of his life back in the village where his father grew up. Waleed is passive-aggressive, and initially makes it clear – without words – that he’d rather be anywhere else than at his grandfather’s bedside. When he arrives in the village with his father, there is a police roadblock – several days previously a young boy disappeared from his home and the search for him has so far proved unsuccessful. Waleed is introduced to his uncles and his cousin Faisal (Alshahrani) for the first time. The family is gathered around the dying patriarch, interrupting the wake only for prayers. Nasser expects Waleed to join in but the boy feels the need to pose as the ‘obedient son’ overbearing. His upbringing has been traditional, although their life in Riyadh is secular. In some ways this has been a poisoned chalice, his cousin seems to be having a more entertaining time in the countryside but there are clearly differences. And soon enough Waleed discovers past traumas from his father’s life in the village as the boy’s disappearance  comes to a head making their drive back to Riyadh a morose one.

DoP Amine Messadi pans faces and objects with great care reflecting the mens’ fleeting thoughts and emotions in this documentary-style drama, where the camera is on the outside, observing. Just before Waleed and Nasser leave, the camera traces back symbolically over a few cracks in the room they shared – this and the total absence of women works as a solemn critique of a society caught between a religious yesterday and a commercial present. Significantly too, Aldhabaan keeps dialogue to a minimum, only the confrontation between father and son burns bitterly in this sombre and tight-lipped drama. AS