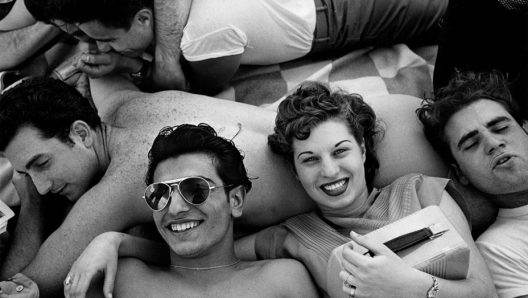 And so began the extraordinary life and times of artist and photographer Harold Feinstein who first picked picked up a Rolleiflex at the age of 15 and headed out to the carefree paradise of Coney Island where every class, race and creed was on parade; rather like Balzac’s Comedy Humaine. Apposite music choices makes this a superlative piece of cinema.

Feinstein just snapped away, often making friendships. A sympathetic and unassuming figure in the crowd, he somehow brought out the best in the most unlikely people because of his carefree chutzpah. But the real kicker in his career was a need to get away from his childhood. And this is best shown in his sensitive portraits of childhood suffering such as Girl on the Carousel, which he sold when he was just 17.

Andy Dunn’s freewheeling and highly enjoyable documentary explores this low profile maverick  whose talent seemingly knew no bounds. Described variously as a “a true master of composition, and an expert editor and printer,” Feinstein shied away from technical prowess and tried to show how easy it is to bring out beauty from the ugly and the strange.

His work had a narrative power and substance, but he never courted fame or commercialism – although it found him in his final years. Feinstein takes a gritty uneven environment and creates out of it some wonderful and tender moments, a master printer crafting pictures of deep dark rich tonalities. His focus was the way bodies moved together, simply hanging out in spontaneous moments.

So his camera became a magic carpet transporting him away from the pain of his upbringing in Brooklyn where he grew up in a large Jewish family, his meat trader father was a figure of fear and loathing. He joined Henri Cartier Bressan at the New York Photo collective that banded together from the mid 1930s to 1951. But the Korean War put paid to all this and in 1952 he was conscripted and shipped to the Far East where he used his camera a tell a behind the lines story of troops during leisure time, waiting around, relaxing and missing their loved ones. Unlike the combat photography of Eugene Smith – who he later joined up with to create the drawings for an extensive photo essay that eventually never got published – his subjects rarely carried weapons – he was a popular figure, even marrying a Korean girl, while he continued to serve in the infantry.

Back in New York living was cheap in the 1950s. An exotic creativity filled the air and attracted an exotic mix of artists: Thelonius monk, Salvador Dali, The Lone Ranger. Anais Nin.  Feinstein found work in the Jazz world, creating covers for Blue Note records. It was here that he met Dottie Glen Goodson who was to be the mother of his son Gjon and daughter Robin.

At a time when there was no real market for photography Feinstein could sell out a show. Highly protective of his material, he missed out on a massive commercial opportunity when MOMA chief Edward Steichen approached him to feature in the massive project that was Family of Man touring exhibition. Feinstein refrained from being a part of the collaboration, wanting control- but success didn’t evade him as British filmmaker Dunn shows in the final stretch of this fascinating and comprehensive documentary that covers all bases.

But Feinstein simply didn’t want to be tied down artistically or personally, he was a true spiritual, continually re-inventing himself and moving on instinctively with his winning personality and highly appealing sense of humanity.

After forming a family with Dottie, Feinstein left for Philadelphia where his discovering his real metier of teaching which nurtured him and gave so much to the photographers he went on to inspire. He discouraged them from getting caught up in the technical aspects of the craft, encouraging creativity in a way that was liberating and combustible for his students, often teaching while high on LSD and mescaline and lots of drink. “Be creative with your life,” was the message he gave his students. Yet it was through his exploration of Digital technology that Feinstein made his commercial mark, firstly through an innovative take on flower photography that led to a lucrative book format. And this eventually enabled him to reintroduce his early work  which eventually got published in coffee table editions.

Not so successful at fatherhood and responsibility, Feinstein kept his dark side very hidden, but the many friends and associates who join in to extol his sympathetic personality and appeal are testament to his empathy as an artist. Some add nothing and are not as interesting as they think they are, actually detracting from the biopic’s laudable strength as a document to one of the most remarkable and worthwhile characters in the history of photography and printing. MT