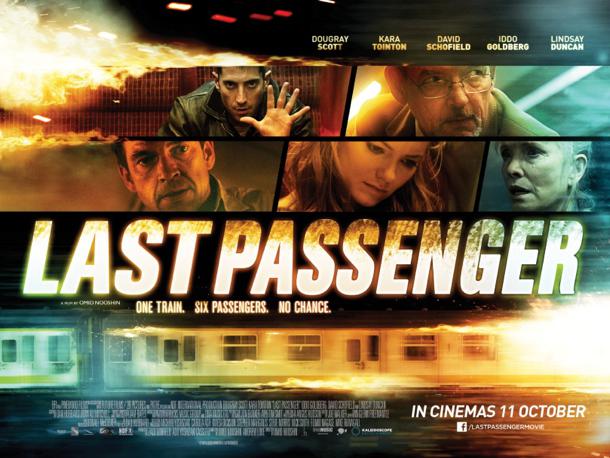 This Britflic is part drama, part thriller with a touch of horror thrown in. It’s also the debut feature of shorts director Omid Nooshin and a technically ambitious one that he surprisingly pulls off with some success.

Set in the confines of a commuter train from Victoria, it ambles along uneventfully for the first 40 minutes where we meet a crew of cut-out characters who fail to engage our interest further than an average trip on the Gatwick Express. A jowly, knackered Dougray Scott is believable as the stressed Dr Lewis Skolar heading to an A&E emergency with his cute little boy (not unlike Danny from The Shining). Flirting with Kara Tointon’s chirpily flirty events manager; he locks horns with a taciturn accountant played by Brian Schofield in his usual sinister style, but here with no real depth. Then there is a caricature Polish LT worker (Iddo Goldberg) who turns nasty and threatens the guard (as if: Poles are disciplined and respectful of authority?). Meanwhile, Lindsay Duncan plays the ‘token’ older woman sitting winsomely with her knitting, the epitome of the smug grandma.

But the real baddie appears to be the mysterious driver who seems to be sealed into his carriage; never to appear. And as the train gathers breakneck momentum, the passengers are unable to work out what’s going on. LAST PASSENGER is a well-meaning thriller that lives up to its tagline: One Train. Six Passengers. No Chance.  It tantalises us with some scary moments and the promise of exciting things to come, but then fails to deliver its goods.  Ultimately this vehicle that has momentum but never really takes off. British Rail: eat your heart out. MT