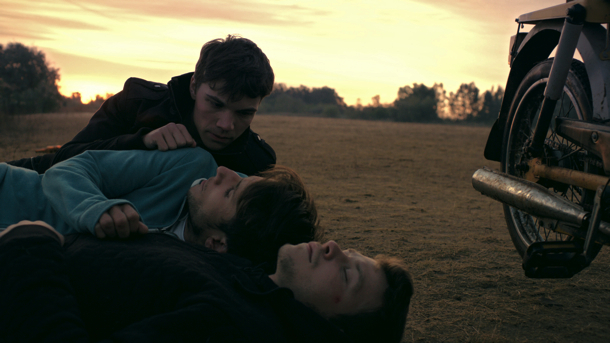 Szabolcs and Bernhard are best friends, training with a German soccer team to become professional footballers. Before their big game, attended by a scout from a leading team, the young men watch straight porn and smoke joints, setting the tone for what is to follow. In the match, Andras is not only sent off, but has a bad game overall. He makes a hasty retreat to his native Hungary, where he takes refuge in a ramshackle house on the prairie, inherited from his grandfather. During the night a young man from the nearby village, (Aron), tries to steal Szabolcs’s motorcycle, but in spite of it, they become friends and are physically drawn to one another during horseplay, ending up in bed. Aron is shunned by the villagers after he shares this with his mother. Splitting up with his girlfriend Brigi (Zita Teby), he then moves in with Szabolcs. Suddenly Bernhard arrives, declares his love for Andras, and asks him to make a decision which has dramatic consequences and vehement resistance from the villagers.

Hungary, particular in the provinces, is still very much influenced by the Catholic Church, and even the young attend mass regularly and participate in processions. Homosexuality is therefore considered a sin, especially in these villages. The love between Andras and Aron is doomed from the beginning; Andras is seen as the seducer, not only poisoning Aron but taking away the male head of a household and potential husband to his girlfriend. The young men of the village want revenge, and since beatings for both men do not change anything, psychological pressure is put on Aron with startling consequences.

Csaszi’s debut captures the wide flatness of the Hungarian countryside, and shows a life more or less unchanged since the First World War. The camera pans over the vastness, dwarfing the men in the enormity of their environment. Szabolc’s diffidence is touching and sensitive, very much in contrast to Aron’s physical masculinity. Land of Storms is a slow-burning mood piece, that may be too slow for some audiences, but nonetheless mesmerises throughout with its potent narrative and the powerful atmosphere. Congratulations to Adam Csaszi’s brave attempt to convey the hostility of a country governed by ‘The Small Landholders Party’, which represents exactly the sort of old-timers who hunt down the likes of Szabolcs and Bernard.

LAND OF STORMS SCREENED DURING THE BERLINALE 2014 IN THE PANORAMA SECTION.