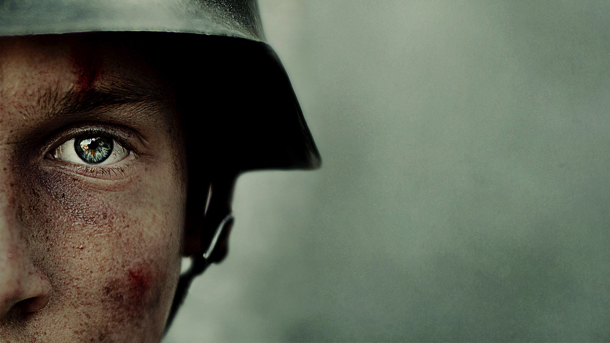 Denmark is one of the few countries emerging from WWII with a measure of credit: mainly for its resistance against Nazi Germany and particularly its defence of its Jewish population. But writer/director Martin Zandvliet (A Funny Man) has uncovered a post-war incidence which somehow tarnishes the unblemished humanistic record of this Scandinavian country.

Set on the Western Danish coast just after the end of the Second World War, LAND OF MINE tells the story of Sergeant Rasmussen (Moller) in charge of a group of German teenage soldiers commanded to clear the coast of about two million mines placed by the German who expected the Allies (wrongly) to land there. Sergeant Rasmussen fosters open hatred towards the Germans: he obviously has been witness to the atrocities of the Nazis in his country.

Near the barracks, Karin (Bro), a Danish woman lives with her little daughter and supports the sergeant’s hostile attitude towards the POWs. For some reason, the teenagers are not being fed and Rasmussen starts to steal provisions for them – initially to help them work more efficiently. But after the first casualties, Rasmussen becomes aware that these young conscripts are hardly the experienced Nazi soldiers and SS troopers whose murderous regime he had to live under during the war. Rasmussen relaxes his regime, even gives the young men a day off. But this all changes when his dog is blown up by a mine in a coastal district declared “clean” by the Germans. More teenagers are killed before they risk themselves to save the life of Karin’s daughter, who has veered off into an un-cleared section of the beach. When his superior Lt. Ebbe (Foolsgaard), a hardliner, wants Rasmussen to transport the four survivors to clear another district, the Sergeant – who had promised the boy that they could go home – has to make a decision.

LAND OF MINE is an essay on forgiveness: highly controversial, since the relatives of the victims of the Nazi-terror are still alive, together with some survivors of the concentration camps. But Zandvliet makes clear that these teenage conscripts had no choice – and whilst the higher echelons of the Nazi party and army fled before the liberation, these young soldiers were left behind. Over 2000 were made to pay the debt for their elders, in clearing the mines, more than half of them were injured or killed during the process. Moller’s Rasmussen is a fine character study: his emotional changes show a decent man who is still suffering from the trauma of the occupation, but is still willing to give his humanistic Ego a chance, even against his own military authorities. DOP Camilla Hjelm Knudsen, the wife of the director captures a desert-like landscape where some of the alienated and isolated teenagers would sometimes rather commit suicide than go on living. Never didactic, LAND OF MINE keeps the audience engrossed with the gripping shifts of emotion for all parties concerned. AS

SHOWING AT CINEMAS FROM 4 AUGUST 2017