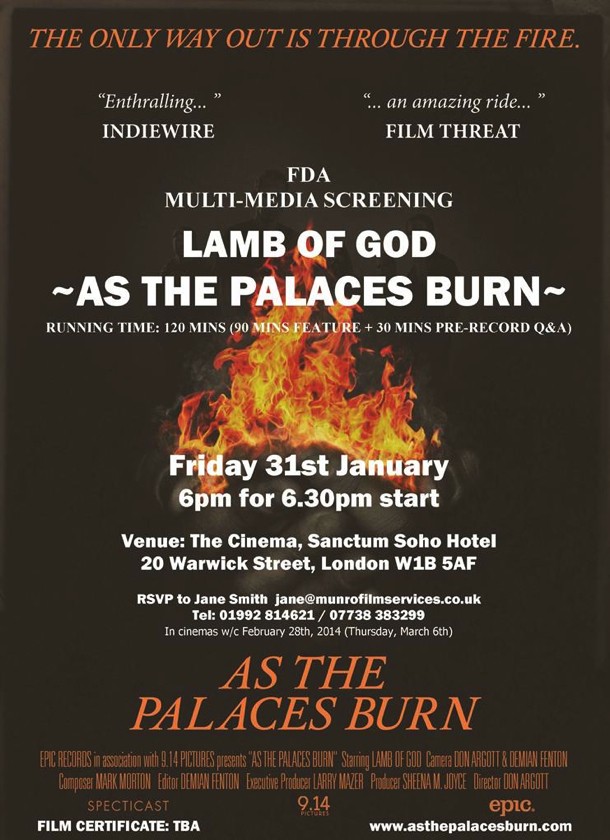 Heavy Metal Group “Lamb of God” from Virginia has been around since 1995 and is now well-known – if their underground status allows such a description. This documentary shows them perform in the United States, Columbia, Venezuela, Israel and India. But it is in Prague where the music is overtaken by real life events, threatening to derail the group, and in particular their lead singer Randy Blythe.

In June 2012 “Lamb of God” was performing in the capital of the Czech Republic, when Blythe got arrested for murder, and spent 38 days in prison. Said murder was supposed to have had happened during a concert the band gave there back in 2010, when a young Czech stormed the stage and was supposedly thrown back by Blythe into the audience, hitting his head and dying subsequently from his injuries. Eventually Blythe was allowed to go home, but the trial in Prague was set for February 2013. The singer returned to Prague, even though he faced a possible long prison sentence. In a moving statement before the court, Blythe confesses to being still shocked by the victim’s death, but denies all guilt.

What could have been a more or less routine music documentary turns into a portrait of a man who had faced his demons for much too long: Randy Blythe has battled alcohol and drug dependency for more than two decades. Before his arrest in Prague he had somehow found an inner peace, which had eluded him before. His band manager recalls that “Randy was in the last year my main man when I wanted something to get done”. The band was anxious that Randy might slip back into old, troubled self. But the opposite happened: Before the trial the singer muses about his past, him growing up in a small “redneck” town, where only the music saved him from suicide. He can now distance himself from his past, and does not need to run away from the future – or the trial. He is sorry for the death of the young man, but equally convinced of his own innocence, supported by some amateur videos taken at the fateful night in 2010. And it is not only Randy who grows up before our very eyes: the rest of the band starts to behave like the forty year olds they are – and not the immature, angry men they had been when they started to perform.

The performances are not shot in a particularly inventive way but as a portrait of Randy this is sensitive and highly poetic and moving. Like the band, the director made the chance meeting with the justice system in Prague into something special – and all of them deserve their happy-end. AS