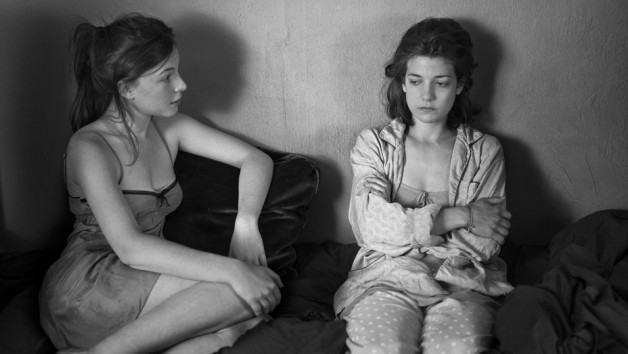 Philippe Garrel is back in Cannes with another family affair that brings to a close his trilogy this started with Jealousy. This grainy black and white Parisian story is as sweet and light as a mini croissant and just as innocuous, showing little insight into womens’ minds despite the collaboration of four writers, including the veteran Garrel. If you enjoy his work it’s watchable enough, otherwise too slim and generic to have much appeal. Daughter Jeanne (Esther Garrel) finds herself at home again with Papa (Caravaca) as her first love affair with ends abruptly. But family life is interupted by her father’s young lover Ariane who is a philandering part-time porn model. The intimate domestic trio discuss love, fidelity and friendship and Arianne frequently becomes jealous when father and daughter spend the evening together. There is a candour to the dialogue but it all feels rather trite. Esther is a natural as is Caravaca but Chevillotte’s Arianne struggles to feel authentic and her story is largely hollow and implausible. Even with a running time of 77 minutes L’AMANT fails to absorb our attention often feeling like an amateur college piece; well-crafted but threadbare in its storyline. MT