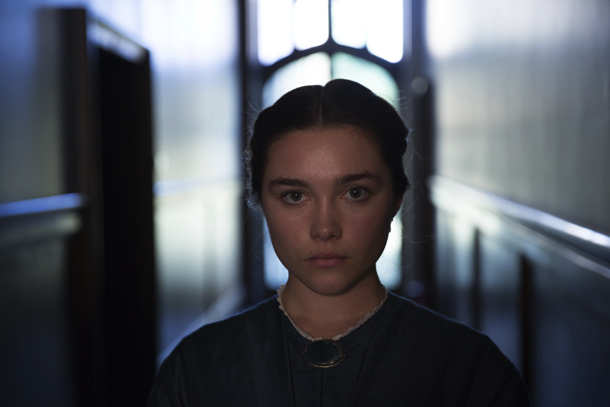 British director William Oldroyd transports Nikolai Leskov’s Lady Macbeth of the Mtsensk to the wilds of 19th century Northumberland in his standout Gothic horror debut, served with a dash of noirish melodrama.

How male authors love to punish their female heroines, particularly the attractive ones. The main character in Leskov’s 1865 novella follows a long line of leading ladies such as Madame Bovary, Therese Raquin and Therese Desqueyroux. And Hell hath no fury like a woman scorned particularly when she is a young wife married to an impotent middle-aged psycho who comes (not) and goes of his own accord, leaving her locked in a stone mansion. Oldroyd adds modern flavour to the brew with a feminist, racial and gender subtext but the narrative retains a distinct whiff of Victorian starchiness from the tight bodices to the gracefully austere set design. We first meet Katherine (played by Florence Pugh) as a nervous teenage bride joining the household of Alexander (Paul Hilton) a wealthy but dysfunctional mining boss with brutish manners and a bedside manner to startle Jack the Ripper.

His lack of bedroom skills and frequent absences leave her craving companionship, sharing the house with her timid housemaid Anna (Naomi Ackie) and tight-lipped father-in-law Boris (Christopher Fairbank). But cocky stable groom Sebastian (Cosmo Jarvis) soon steps in to warm her wintery solitude and eventually the two find themselves locked in lust unable to keep their love a secret from the household staff and Alexander himself. Murder and mayhem ensue in the devilish denouement.

Performances here are astonishing particularly from Pugh in her first major role, mastering a decent Northumberland accent and a minxy sparkle in her eye to boot. While Oldroyd and screenwriter Alice Birch stay true to the pages of the original, the finale is more in line with Polanski than Leskov intended.

Shot on a tight budget but none the worse for it, Lady Macbeth was made for under £500,000 as part of a regional film-funding programme supported by BBC Films and the British Film Institute. Sometimes the film feels claustrophobic trapped in its country house setting and Lady Macbeth makes a pretty swift descent into Hell given the scant running time of 89 minutes. That said, this is an enjoyably gruesome romp that remains top drawer (particularly in the dress and lingerie department) and true to its literary pretensions never sinking into tawdriness as it unleashes a gripping tale of male oppression and female fury in a remarkable debut. MT