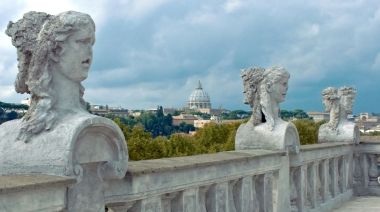 Eugene Green’s Portuguese Nun was a work of subtle and enigmatic beauty. La Sapienza (a Univeristy in Rome and ‘wisdom’ in Italian) has the same rather cool detached allure in which the actors recite their lines clearly and often looking straight into the camera, in well-composed frames. It centres on a disillusioned middle-aged couple who have reached the companion stage after a difficult marriage where they have lost a handicapped child. Alexandre (Fabrizio Rongione) and Alienor (Christelle Prot Landman) arrive in Stresa, Lake Maggiore, on the first leg of a trip that intends to re-ignite their relationship and allow Alexandre to complete his architectural research on the work of his hero, the Baroque master, Francesco Borromini. They come across a brother and sister who are students; the young man Goffredo (Ludovico Succio) is studying architecture, his sister Lavinia (Arianna Nastro) becomes bed-ridden with unexplained dizziness. Alienor suggests that her husband continues his research trip down to Rome with Goffredo’s able assistance, while she remains with the poorly young girl to chat in French and help with her recovery.

In this intellectual, dialogue-driven drama there is little natural small talk: each conversation is direct and frank, aiming to offer some kind of didactic enlightenment or edifying debate on the subject-matter discussed: architecture, the theatre, love, philosophy allude to the title of Wisdom. Through these crisp and pared-down exchanges, Green fleshes out his characters’ thoughts and feelings. The men embark on an richly textured architectural diatribe covering the finer points of Barroque architecture while the women discuss more emotional and psychological issues including the nature of how the past, present and supernatural co-exist in perpetuity. Gradually though, the mens’ conversations appear more cultivated and heavyweight while the womens’ are made to feel more trivial and ephemeral. That said, this is an ambitious and richly textured film not least for its spectacular landscapes and majestic views of Borromini’s Baroque architecture in various locations around Italy. Occasional flashes of humour help to lighten the load of the intense didacticism, enriched by the elegant visuals of Raphael O’Byrne. MT.