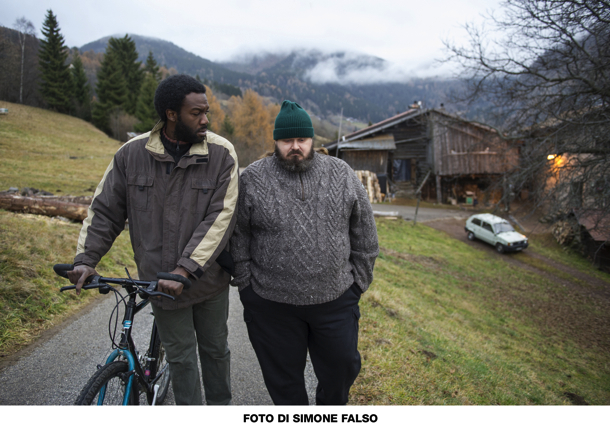 Andrea Segre’s poignantly-observed but non-judgemental  ‘New Wave’ mood piece is an immigration story set in the Italian Alpine region of Trentino Alto Adige.  Segre stumbles at first but gradually finds his feet in telling the story of Dani, a grieving refugee from Togo, who has lost his family and fetches up in a remote community that has also experienced the tragedy of loss. Peter Mitterrutzner plays a woodcutter and his daughter Elisa (a brilliant Anita Caprioli) who are bringing up Michele (Matteo Marchel), a young boy who has been emotionally scarred by the loss of his father.

The local woods provide therapy for the pair as they work out their frustrations and disappointments on the land and although Dani feels very much at odds with his new environment, Michele leads the way, being familiar with the local countryside.  Newcomer Matteo Marchel is particularly good in a believable performance that combines childish anger with an ability to manipulate his elders.

Well-known for his documentaries, Andrea Segre uses his considerable talents in capturing the quiet beauty of the mountain landscape with the help of lenser Luca Bigazzi (La Grande Bellezza, This Must Be the Place).  Very much a character in its own right, the isolated mountain region provides an effective backdrop to this compelling narrative with its themes of nature, childhood and loss. Immersive and visually stunning, La Prima Neve is a promising feature debut. MT