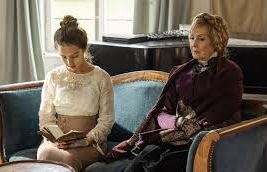 Inspired by a Wilkie Collins 19th century novel The New Magdalen this female centric drama starring Sabine Azema is transposed to the verdant Vosges region of France, under German occupation during the First World War, where it turns on a case of stolen identity.

The Red Cross are busy recruiting nurses to tend to the war-wounded and Nelie – a poor but educated orphan – decides to join up. There she meets Rose a Swiss Protestant who has lost her family but soon dies in a blast, Nelie quickly assuming her identity in a bid to return to neutral Switzerland

But a letter in Rose’s pocket gives Nelie an idea. So she changes her mind soon finding herself in the illustrious household of vicar Julien and his wealthy aunt Madame de Lengwil, a cultured but staunchly Catholic intellectual with strong opinions who ‘Rose’ finds challenging company, particularly when Madame starts to probe deeper into her provenance while also seeing her as the daughter she never had. And when the real Rose reappears during a musical soirée in Madame’s luxurious country house it appears that Nelie’s cover is blown in the tense third act of this gripping social drama

Like his fellow writer and countryman Charles Dickens, Wilkie Collins’ ‘Victorian sensation’ novels often focused on complex and secretive domestic relationships, and Aurelia George and her co-writer Maud Ameline capture the fraught female sensibilities that sensitively reflect the mood of anxiety and enigma, elegantly performed by Azema and Khoudri in this classically styled and gracefully-paced drama which bristles with intrigue in showing women at their best – and their most devious. MT