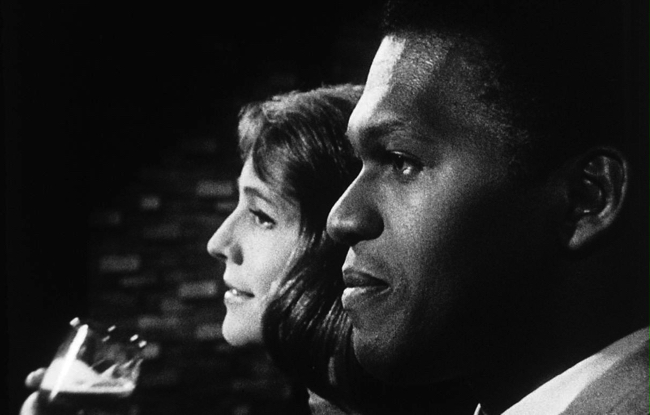 Melvin Van Peebles made his cheerfully artful French-language debut with a grant. Notable because it was the first feature length film directed by a black American La Permission sees a soldier – also black American – falling for a white French girl during a weekend’s leave from his army base in Paris, where the film was shot in 1967.  Harry Baird plays the soldier with a slight West Indian accent and Nicole Berger the friendly French girl with a lovely smile.

Based on his own novel The Story of a Three Day Pass, the romantic comedy ingeniously captures the tentative nature of dating and first love with an affective way of second-guessing how each scene will play out. When the soldier first spies Miriam (Berger) in a bar he imagines her rejecting his advances, when in actual fact she goes on to welcome him with open arms, and he invites her to spend the weekend by the sea in Normandy. Slightly less successfully – for obvious reasons – is the scene where Miriam imagines him dressed in a grass skirt. But Van Peebles clearly wasn’t offended by this at the time. Another one sees him as a 19th century aristocrat entertaining his love in an elegant chateau. Needless to see, he is spotted by some fellow soldiers who snitch on him on their return to base, but there is a light at the end of the tunnel, of sorts. La Permission is upbeat and unpretentious and feels like a cross between Guess Who’s Coming to Dinner and Un Homme et Une femme.

Sadly Baird and Berger are no longer with us. The sad ending is that she died tragically in a car accident just after the film was made. MT