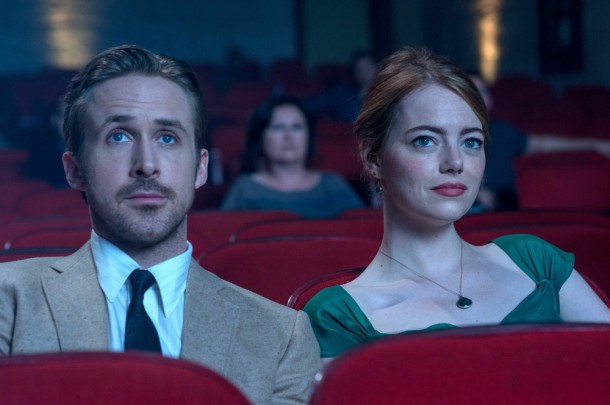 The 73rd Venice Film Festival opened with the razzmatazz of a rousing Hollywood musical, that is sadly not as good a film as it thinks it is, despite the much hyped critical acclaim that has it scoring more points on Imdb than some real classic masterpieces. Damien Chazelle’s much anticipated follow-up to Whiplash is a musical by theme and content and breaks into song during a title sequence that feels rather awkward and amateurish with most of the songs sung off- key, when you consider the wealth of US musical talent available.

Ryan Gosling and Emma Stone star as LA wannabes at the bottom rung of the creative careers: he is Jazz pianist Sebastian, she as aspiring actor Mia. Gosling and Stone have worked together before with writer-director Damien Chazelle and both are decent enough dancers even if they do not have perfect pitch. They share a sparky onscreen chemistry from the outset when they first fall out during a mini fracas from their respective cars while driving into LA, and then later when their paths cross again just after Sebastian (Gosling) has been fired for playing his own tunes during his nightime gig at a fancy restaurant. LA LA LAND would work just as well, in fact better, as a straightforward drama – the banal script and musical elements sometime feel forced and unnatural although Seb does compose one catchy tune (from original composer Justin Hurwitz) which becomes ‘their’ song in an fluffy leitmotif that runs through the rest of the movie – at it is very much a movie: and boy can Gosling move.

This is a lively and entertaining film that make the mainstream crowd happy – it could be anybody’s story and resonates with most of us, whether we are working in creative fields or not, with its ‘reach for the stars premise’ of following your dream rather than settling for a safe and comfortable existence. Stone is the most vulnerable of the two as she finds the constant rejection of screen tests and auditions difficult to deal with but eventually gets into her groove. Gosling is more punchy and down to earth. Obsessed by trad jazz rather than the meandering self-indulgent kind, he eventually lands up with a well paid job playing the latter before setting up his own club which allows him to play the stuff he really enjoys. Falling in love comes naturally to them both but the road is rather rocky and involves the less travelled one on the way.

Gosling gives a suave and seductive turn throughout, never doubting himself for a moment. Stone – who won the Volpi Cup at Venice 2016 – feels more brittle and spiky, although she really puts her heart and soul into singing, dancing and acting. Damien Chazelle has a film grasp of the dark and dangerous nature of showbusiness and brings this to LA LA LAND as he did to his debut Whiplash. The final ‘what might have been’ montage works well enough to send to you off with a spring in your step. It’s a good film – but not a great one. MT