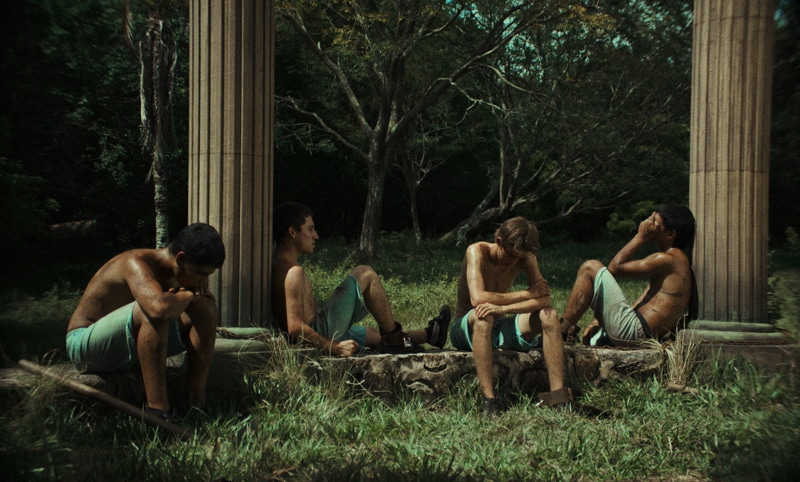 Latin American directors continue to mine their turbulent history – past and present – in this thundering thriller that takes place deep in the Colombian tropical forest.

Premiering in Semaine de la Critique La Jauria is a confident debut from first time filmmaker Andres Ramirez Pulido who has fleshed out the ideas from his Palme d’Or nominated short film Damiana (2017) into a story crime story with a subtly redemptive twist.

Eliu (E.Jimenez) is serving time in an experimental hacienda-style young offenders institution for crimes he committed with his friend El Mono (M Jimenez), a recovering drug addict. The petty criminals are supervised by para-military forces under the control of Godoy (Rincon), an elderly ex-offender who practises obscure breathing exercises, believing the therapy will cure the men of the evil spirits possessing them.

The arrival of El Mono changes the dynamic in the camp and Eliu, who has always hated his father for physically abusing his mother, decides under the influence of drugs and alcohol, to murder him – only to learn later that he and El Mono have killed the wrong person. Worse still, they cannot find the place where they dumped the body in the caves. Meanwhile the police are growing tired of Godoy’s slow and avant-garde methods, and when another inmate Calate ((Vasquez), raises concerns about Godoy’s style of therapy, the punishment meted out to him spins out of control.

DoP Balthazar creates a haunting atmosphere of surreal horror which works particularly well in the night scenes. Working with a cast of mostly non-pros, Pulido ramps up the tension, his poetic realism worthy of the great Fernando Birri. The Pack is a great example of the signature cinematographic language of the South American continent, with the director overcoming the limits of his budget with vision and inspiration. AS