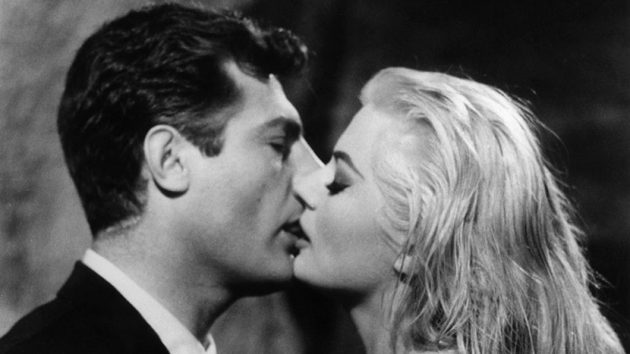 Fellini’s early films were largely autobiographical, and this is particularly true of – I Vitelloni and Il Bidone –  But in the 1960s his focus took a radical shift: La Dolce Vita is a sumptuous story about the pampered aristocracy and their superficial followers, seen from the perspective of  Fellini’s alter-ego, the journalist Marcelo Rubini. Fellini would stick with this lavish aesthetic for rest of his career.

The opening sequence is symbolic: Rubini (Mastroianni) sits in a helicopter with his photographer sidekick (Santesso) next to him. A helicopter is transporting a vast statue of Christ over Rome, but the men are only interested in getting the phone numbers of some young women sunbathing on a roof terrace. Rubini is not really a journalist, he writes gossip columns about celebrities and their orgies; well-healed Romans and religious maniacs. Children run along the streets, trying to catch hold of the statue – in vain, it is just another mirage. Rubini is running too: away from his suicidal fiancé Emma (Furneaux). First he takes a joyride with the love-crazed heiress Maddalena (Aimée). The couple pick up a sex worker and drive the woman to her flooded basement flat. Then while she’s busy making coffee, they indulge in a lust-fuelled quickie, perversely turned-on by the decadent surroundings. Paying her generously only demonstrates their utter contempt of her sordid lifestyle. Next on Rubini’s agenda is Sylvia (Ekberg), a Swedish starlet whose arrival at the airport we have already witnessed. Again, Rubini invites the woman into his car – this time for a tour of Rome – ending at the famous scene of Fountain of Neptune. But there is no happy-ending here either: Sylvia’s husband (Barker) first slaps his wife, then gives Marcello a good going over. Meanwhile Marcello has had to fetch Emma from the hospital, where she has been treated for an overdose; now clinging to him even more.

They fetch up in a circus-like site near Rome, where two children have witnessed the appearance of The Madonna – but Rubini is not the only one doubting this miracle. Via a sexually charged jamboree with the aristocracy (where we meet Maddalena again) Marcello ends up at yet another celebration, this time near the sea where a fantasy creature with one eye is the main attraction.

Marcello’s moral bankruptcy is portrayed by two crucial encounters: the first sees his lonely father (Ninchi) literally running away from him, appalled by his glib emptiness. The second involves the writer Steiner (Cuny), who undertakes to find Marcello a serious writing job “so you can stop working for semi-fascist papers”. But Steiner’s own life ends in tragedy in a devastating scene, his wife and Marcello looking on in utter horror.

The wide-screen images of Fellini’s regular collaborator Otello Martelli (La Strada, Il Vitelloni) underline the filmmaker’s raison d’être was to portray “expressive and often ridiculous visions of life” – “where nobody gets out alive”.  Nowhere is this better illustrated than during a dazzling sequence where a woman is standing on a table above a horse.  The photographer asks Rubini for advice on the next shot. He answers caustically: “Reverse their position”. AS