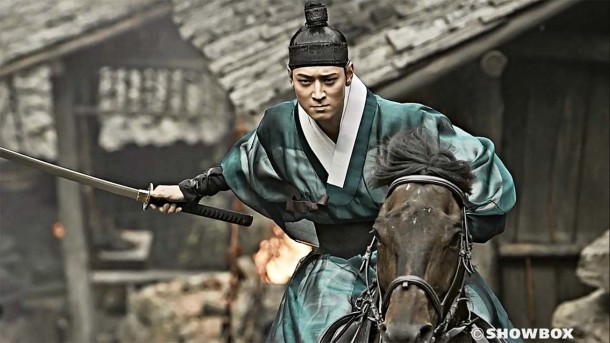 Honouring its full title KUNDO: THE AGE OF THE RAMPANT, the film was equally rampant at the South-Korean box office, before being replaced a few weeks later by an even more brutal seafaring movie as the best-selling South Korean movie of all times.

Set in 1862 in the last days of the Josean era, KUNDO uses this corrupt period as an background for an all out “Eastern”, a genre not long ago known as Kung-Fu, but elevated into the opposite of a “Western” to gain serious attention: some critics will draw parallels to Leone, Kurosawa and Morricone, but KUNDO is an unadulterated excuse to show off the fighting skills of all concerned. And as brilliant as these skills turn out to be, KUNDO is in the end just a martial art show-off with swords, guns and meat cleavers.

Warming-up very slowly and introducing too many characters, whose fate is never resolved, KUNDO finally boils down to a duel between two very different outsiders: Dochi (Ha), a cleaver swinging ex-butcher from the lower classes, who has to become a bandit to support his family, and Jo-Joon (Kang), a would be nobleman, who feels cheated out of his rights. The baby-faced villain somehow has our sympathy, since he was the original heir to his father’s title and fortune, but the birth of a half-brother meant that Jo-Joon was a disqualified to inherit the family title because his mother was a mere courtesan. Jo-Joon plans to murder the whole clan, including a pregnant woman. Entrance Dochi, who is too soft-hearted for such a heinous crime and declines to act, only for Jo-Joon to have his whole family murdered. The rest of the film builds up to the show-down between the two and their armies in a bamboo forest.

Yoo pulls every trick in the book, including a woman warrior, who slaughters hordes of men with her baby on the back. Camera work is brilliant, not only the fighting scenes, but the landscape panoramas are impressive. The subtitles are often hilariously funny, taking away any hope of seriousness for foreign audiences. Overall KUNDO is an outstanding choreographed martial ballet, which would have made more or less the same impression without the pretence of a narrative – light years away from anything a Kurosawa or Leone achieved. AS

KUNDO; AGE OF THE RAMPANT SCREENS DURING THE UK KOREAN FILM FESTIVAL 6-21 NOVEMBER 2014