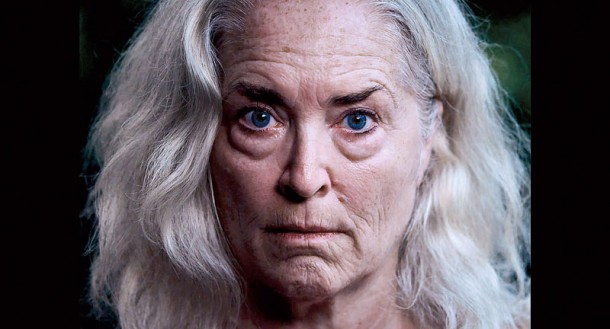 Trey Edward Shults’ debut makes a Thanksgiving get-together the setting for this brilliantly played, unsettling character drama that exposes deep rifts within a conventional family – if there is such a thing. This is a stylish film made watchable by an dynamic central performance by Krisha Fairchild (the director’s aunt) whose return to the bosom of her family after an absence leads us to believe that something tragic and momentous has preceded it. Winner of the grand jury dramatic prize at SXSW, KRISHA also had a showing at Cannes and LFF 2015, but it paints the older generation rather uncharitably at a time where they need all the support they can get in our ageist society.

Arriving on the doorstep with some heavy emotional baggage, Krisha is a woman who has tumultuous issues to face and has already covered some difficult ground,  and her family is clearly not without blame either in this highly charged dynamic. From the outset, it’s unclear why this 60 year old woman is tiptoeing around apologetically on her best behaviour; she should be a respected elder member of the clan at this special family day, rather than the naughty child who attracts our sympathy for reasons we are not quite certain should be honourable.

But this is not her own home but that of her sister Robyn (Robyn Fairchild), and their elderly mother (Billie Fairchild), in clearly still affectionately regarded as ‘the queen bee’, capable of a nasty sting. Krisha’s relationship with her son seems to be the most fragile and strained: Trey (who also directs) is not going to meet her halfway in her attempts to build bridges. It gradually emerges through small behavioural patterns – she locks certain meds away in a case – and in a confrontational scene where her sister brings the issue to a head – that Krisha is an addict and a tightly wound spring. She has struggled painfully to contain her weakness but any trigger could unleash the destructive force within her and take everyone else with it. Shults’ clever script still wants us to see things from her perspective.

Set in the director’s family home in Texas this is very much a chamber piece whose mounting tension is cleverly ramped up by Brian McOmber’s string score and some clever camerawork that conveys an increasing claustrophobia (with changing aspect ratios) that we have all experienced before at family reunions, especially where alcohol and forced jollity enters the arena of managed expectations. Somehow we are rooting for Krisha – against the odds  – but our compassion will be tested to the core in a coruscating climax of this gripping domestic thriller. MT

ON GENERAL RELEASE FROM 9 DECEMBER 2016 | EVERYMAN