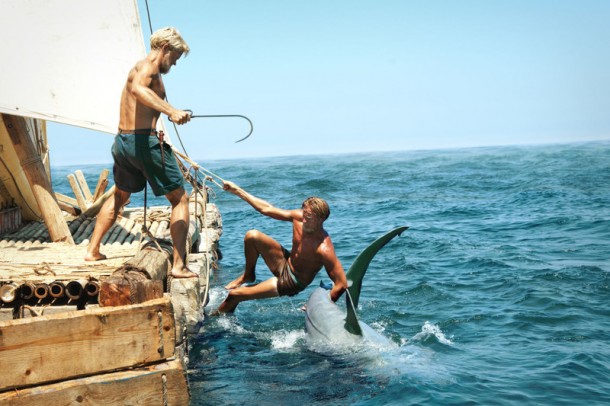 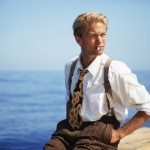 In 1947 Norwegian Thor Heyerdahl (1914-2002) sailed with his crew of five on a self-build raft nearly 5000 miles across the Pacific Ocean from Peru to the Polynesian Islands. The reason for this epic voyage that took 101 days is uncertain, as the South Americans had already proved that the journey was possible fifteen hundred years previously.

The first twenty minutes of the film are the most interesting telling us something about Heyerdahl (Hagen) and his relationship with his first wife Liv (Kittelsen), who divorced the explorer after his return, bringing up their two sons. During the journey we are treated to the usual spectacle of impressive male heroism, even though they manage to loose the ship’s parrot to a shark. 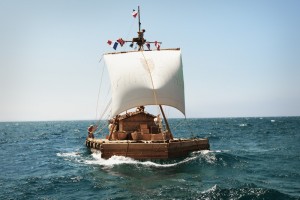 KON TIKI is largely a hagiography, leaving no room for any critical reflections about what was really achieved by this mission that portrays Heyerdahl as a cross between a Nordic God and a spiritual leader – but in reality only showing a man with a terrible lack of imagination and not much care for his family: the prototype of the semi-autistic warrior of his time.

Performances fail to excel on any level: the men hamming their way through the proceedings, with only Kittelsen standing out from the ensemble cast with a turn of nuanced subtlety. However, Kon-tiki is visually impressive with Geir Harly Andreassen’s camera occasionally struggling with the restricted location and soon running out of variations on the sumptuous seascapes. Overall KON TIKI is aesthetically and contents-wise a throwback to the early Fifties, showing male physical dominance in a very clumsy way, making the audience of today occasionally cringe with embarrassment. If you’re looking for a straightforward sea sortie KON TIKI is as solid and well-made as Heyerdahl’s raft, offering some bumpy moments before becalming you into a gentle slumber. AS