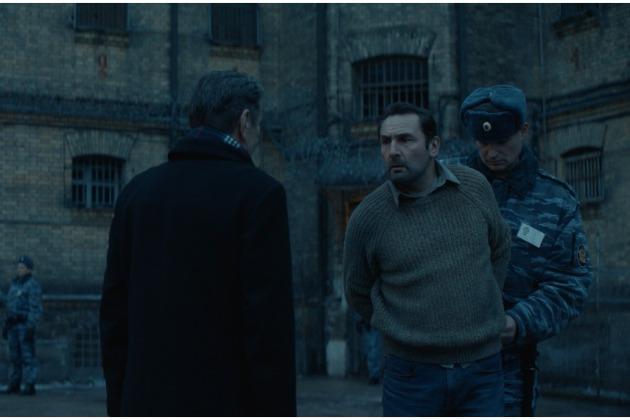 Gilles Lellouche brings some much needed Gallic charm to this chilly political espionage outing co-written and directed by Jerome Salle and based on real events.

Kompromat is a story that couldn’t get much grimmer if it tried in shadowing the current state of affairs in Russia. Lellouche plays affable French diplomat Mathieu Roussel who is thrown into jail in subzero Siberia on a flimsy charge of child pornography. In reality he is being framed by the FSB in a ‘no-win’ situation known as a ‘Kompromat’. But Matthieu is mystified as to why, in a plot that only goes to underline just how impossible his situation is when up against the Ruskies.

You can’t help feeling sorry for Mathieu when it later emerges his marriage to French wife Alice (Lasowski) is is also doomed. They are briefly seen in a lukewarm exchange before the authorities arrive to arrest him in a violent incursion. Later Alice returns to France with Rose, but not before filing a complaint about him to the authorities.

So begins a Kafkaesque nightmare of epic proportions as Mathieu takes on the authorities from a weakened position. Friendless and down on his luck, he turns to a mirthless Russian lawyer called Borodin (Godunov) who manages to get him released on an electronic tag. Then there is Louis-Do de Lenquesaing’s sharp-suited French ambassador, who briefly swings into action but to no avail. A Russian woman called Svetlana (Kulig) – whose marriage is also in trouble – supplies a frost-bitten romantic frisson. The two had briefly danced together at a work do, and she enables his bid to escape by supplying a mobile phone. But can he really trust her as he makes his way across the frozen wastelands in this dour but watchable thriller. MT