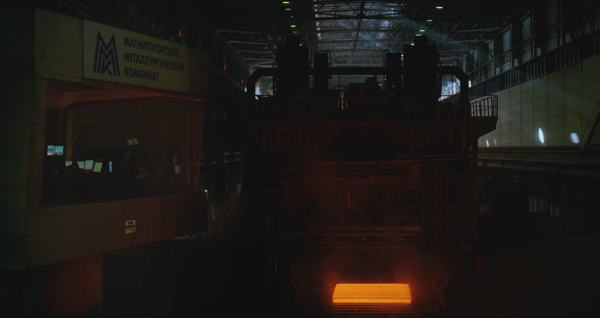 A remarkable wide screen opening sequence shows the mighty industrial heart of Russia, the main town of Magnitogorsk in the South Urals and home to the Kombinat, one of the largest iron and steel works in the country.

But Gabriel Tejedor then narrows his gaze onto the human story behind the billowing pipes and red hot furnesses. That of the locals who live here, and the wider social implications, asking the question: What makes us stay in a place that is potentially detrimental to our health and livelihood?.  The focus here is a family who live in the shadow of the vast industrial complex whose rhythm has dictated their lives from generation to generation, socially, economically and politically. Work in the factory is gruelling and dangerous, requiring heavy protection from frequent electric shocks.

But the toxic nature of the surrounding environment also has a negative impact on the health and wellbeing of this family and their relatives. And it seems this plant also dominates their leisure time. Lena and Sacha live with their little daughter Dasha. Lena teaches the salsa lessons suggested by the factory. And this helps Sacha to dance away his problems and forget the pressure of work. Meanwhile his brother and his wife are hoping to move to Novosibirsk in Siberia, to escape the heavy pollution that is causing their daughter neurological problems.

Over the seasons, Gabriel Tejedor (Rue Mayskaya, VdR 2017) paints a portrait of this new generation of workers and young parents whose living conditions seem to be inevitably determined by the Kombinat and State capitalism which feels much the same as Communism in its extreme control of citizens. Not as insightful or darkly amusing as Vitaliy Manskiy’s documentaries about modern Russia such a Pipeline, or Motherland, Kombinat is nevertheless a thoughtful and upbeat snapshot of today’s Russian working class and what it means to belong to a place.MT