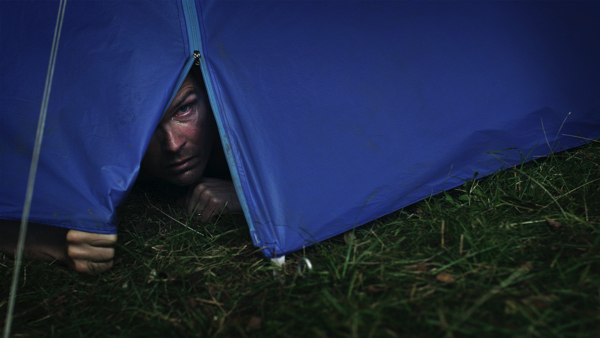 Koko-di Koko-da blends live scenes and 1950s puppetry to create an enigmatic study of grief that plays out like infinite swirling blend of Groundhog Day and The Babodook. It also stars a white cat leading us through the forest where the leading couple’s nightmare is accompanied by a haunting refrain from an old-fashioned music box.

Writer/director and animator Johannes Nyholm gained critical acclaim with his first film The Giant which shares this latest outing’s sense of unsetting poignancy. Tobias (Edlund), his wife Elin (Gallon) and their daughter Maja (Jacobsen), all made-up with rabbit faces, are enjoying a shellfish supper which leads to the young girl being hospitalised, dying the following morning on her eighth birthday, their present of an old fashioned music box carefully wrapped, but suddenly superfluous.

Grief divides Elin and Tobias. Soon they cannot stand each other’s company. On a camping trip in the woods they both endure a concurrent nightmare that sees them attacked by three of phantasy horror figures – weirdly those depicted on the music box. They are led by Mog (Belli), a dandy with a bowler, who is one of the most talkative killers in film history. His vicious dog is equally frightful, whilst Sampo the Strongman (Baloo Khatchadorian) is a man of few words. Cherry (Litmanen) looks like a hairy monster, and is mute. The nightmare always stars with Elin wanting to leave the tent for a wee. She is slaughtered, and Tobias, who does not try to defend her, meets the same gruesome fate. Unlike Groundhog Day, the two learn nothing from the attacks. The grim denouement offers a solution to their trauma affront.

Cuddly bunnies become beasts of horror here. The terrifying dramatic scenes are intercut with 1950s-style monochromatic animations involving three of the furry beasts. The role of the white cat, who leads Elin to a cinema like room, where she can watch the animation, is not quite clear, but more of the feline would have been welcome.

DoPs Johann Lundborg and Tobias Höiem conjure up extraordinary images, reflecting the unfolding horror in the woods, with the claustrophobic scenes in the tent and the car the most convincing. Nyholm never lets a moment go by where Elin and Tobias are not threatened, the noise of the smallest twig breaking sets off alarm bells. What at first sight seemed merely eclectic, enigmatic and opaque gradually becomes texturally more rich and intriguing. No wonder it won awards at the Fantasia Film Festival and the Brooklyn Horror Film Festival. AS

ON RELEASE NATIONWIDE from 7th September 2020