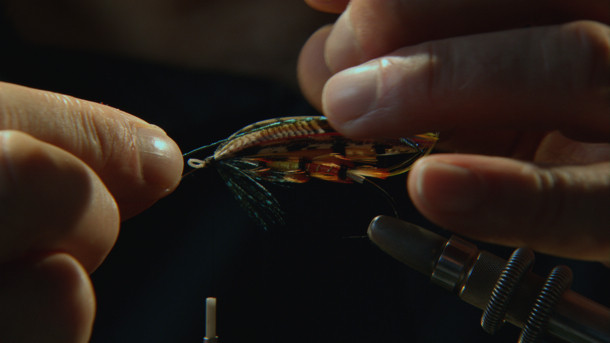 American filmmaker Eric Steel describes his documentary Kiss the Water as an ‘invitation to a fairytale’. And it certainly is. Set in Scotland, it tells the story of Megan Boyd, an artist based deep in the Highlands, who was enchanted by the brightly coloured and intricate pictures she found in a book about fly-fishing when she was a little girl.  A lonely outsider, she taught herself to make these delicate objects using the finest feathers known to humanity.  Their vibrant colours and delicate shapes are certainly the stuff of dreams and carry names redolent of the rich and regal heritage of the British Isles. 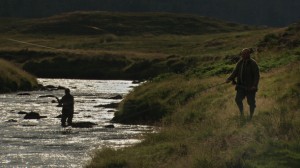 Even if you have no interest in fishing or Scotland, this beautifully-crafted film will enchant you with its cleverly-animated sequences featuring impressionist-style paintings of swirling underwater wildlife that conjure up a world of mystery and intrigue, perfected pained with dreamy photography of  the glorious Highland countryside.  Even though Megan Boyd never married and appeared to be an outsider, working away devotedly in her workshop, it is clear that she possessed a richly emotional and romantic soul that is cleverly evoked by Eric Steel’s imaginative rendering in animated mixed media.  Working exclusively during daylight hours and eventually losing her sight, Megan perfected her skills and worked on into her eighties.

Despite the ultimate (rather crass) revelation that one of her flys actually fetched  thousands of pounds, it is fair to mention that Boyd was a humble creature who never intended to capitalise over her skill and never actually charged more than a few pounds for her wares.  Naturally, among her customers was Prince Charles, who grew so fond of her that he actually invited her down to London to collect her OBE award.  Such was her modesty that she declined the invitation and the Prince duly delivered the award personally to her Scottish abode. MT