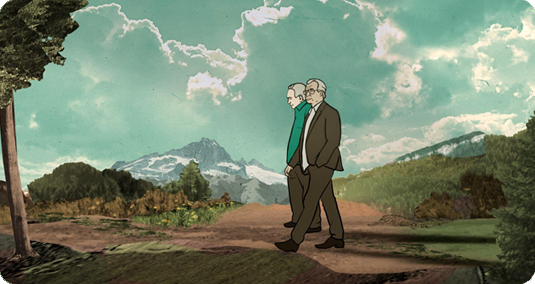 Directed and co-written by Eliav Lilti (Urban Tale), this portrait of Israeli writer, filmmaker and playwright Ephraim Kishon (1924-2005) is mainly told by and from the perspective of his three children. It is not a hagiography of the man who wrote 50 books, 9 plays and directed 5 films, but a tribute to a whole life dominated by the Holocaust, which Kishon survived, but whose shadow he could never escape.

Born in Budapest as Ferenc Hoffmann into a middle-class Jewish family, university was not an option because of the racial laws, so he started to make jewellery instead, before being deported to the camps: “The Jews of Hungary felt safe; they said ’well, even the doctor of the leader Admiral Horthy is Jewish’. But then Horthy send his doctor to Auschwitz and the Jews saw their fatal mistake”.  Kishon survived due to his talent as a chess player: “I did not dare to lose a match to the commandant, because he would have sent me back to the forced labour force”.  Escaping, he found his way back to Budapest where he was reunited with his parents and his sister, who had been saved by a neighbour, whilst the rest of the large family was murdered.

Under Stalinism he made a career with a satirical magazine under the name of Kisthon, also winning a contest for best play which focused on the persecution of all bald people – serving as a metaphor for the Jews – because they had been declared “bad” by the state. He got his prize money but the play was never staged as one of Hungary’s leading politicians, Matyas Rakosy, was famous for his baldness. In 1949 Kisthon emigrated to Israel, where the border clerk renamed him Ephraim Kishon.

After learning Ivrit (Hebrew) whilst working as a janitor in a kibbutz, he took up writing again in his new language. His books and plays were very successfully, and his debut film Sallah Shabati (1964) was nominated for a Foreign Oscar. After what was to be his last film, The Fox in the Chicken Coop (1978) turned out to be a flop, Kishon felt unwelcome in Israel and set up a second home in Appenzell (Switzerland) in 1981. With his books selling in their millions, he was by now more popular in Europe than in Israel. In Germany, “the children of my executioners are queuing for hours to get a signed copy of my books.” He even started writing in German, one of the books called “Mein Kamm” (My Comb). Needless to say what the Israeli reaction was. But Kishon defends himself: “It was not just the Germans; Hungary, Romania and many more states supported the Holocaust. There were 110 000 Waffen-SS volunteers in the Netherlands. If you want a total boycott, you can’t set foot in Europe”.

His children Renana, Rafael (Rafi) and Amir talk about a rather strange upbringing. Driving with thier father in the car, they had to listen to the speeches of Hitler and other leading Nazis. And at bedtime, their father would give them Hitler salute: “That was very typical for my father”, says Renana. He also joked about his time in the camps: “The soda was very flat, no sparkle”. On the other hand, the children were allowed to watch Clockwork Orange and other adult films: “There was no censorship”. The boys could read the Playboy, which their father flaunted at the table. When Sara, his wife of 35 years and mother of his children, was dying of cancer “it turned out, that Dad was not a Mother Theresa. He never took her for treatments, and when she died, he was not present, he could not bring himself to see her”, says Renana tearfully. Whilst Kishon cried a few days after her death whilst receiving the Israel Prize for Life Achievement, he could not refrain from criticising that “it is like a state pardon, to get this prize. It is usually giving to left wingers, who love the Palestinians, and not the settlers.” Renana testifies, that he was always jealous of Amos Oz; and Kishon was angry, that he was not decorated for his writing alone, he felt snubbed, because he was foremost a writer.
Lilti and co-creator Arik Bernstein have integrated cartoons of Kishon, and a animated version of the long interview, Kishon gave to his friend, the journalist Yaron London in Appenzell in the mid-90ies. There are many special effects, like the cartoon versions of Kishon and London walking in 40ies Budapest, whilst the Jews are being deported onto trucks. Kishon is so much more than a biography: it is a history lesson about the force of evil, and its longevity. AS