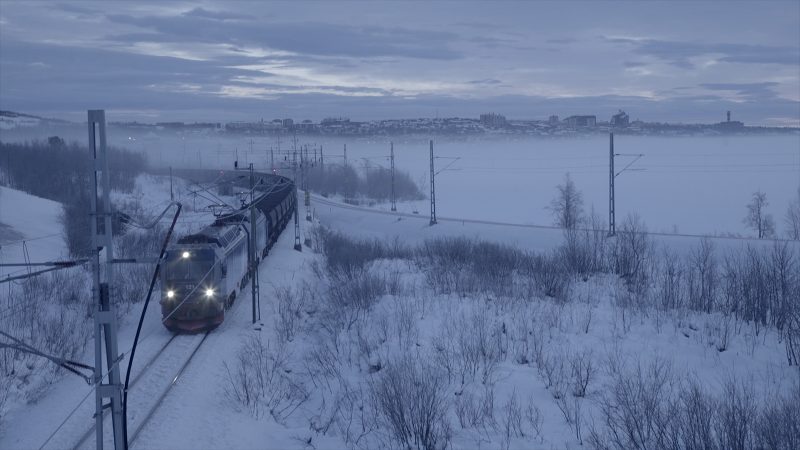 The first feature documentary by Czech writer/director Greta Stocklassova is emotional, but well-structured: a work-in-progress report on the Swedish town of Kiruna, 200 km above the arctic circle, which is being moved three km to the east. The 17,000 inhabitants of the 2840 sq/mile city have very different reactions to the move.

Kiruna has lived off its mining industry, but finally it it has caught up with it: The LKAB company is moving Kiruna because the ground underneath is about to give way. The project of relocation will last until 2100; the movement of zone 4 now under work, will be finished by 2033. We watch houses being transported on huge lorries: classic buildings of all sorts will be saved this way.

In the Philosophy Club we meet Timo Vilgats, an elderly gentleman, a sort of town historian. He is appalled by the relocation, filming the ruins of his house with his mobile and pointing out out where the rooms in the house had been, where his children were born and grew up. Others take the move in their stride: a woman the same age as Vilgats sits down with a planner and tells her where she wants to have the plugs in her new home.

Meanwhile, in the home for asylum seekers, Abdal Rahman Josef is waiting for an interview which will decide his future: he is from Yemen, and his life would be in danger if he was to be sent back. Abdal complains about being left behind, whilst others are processed much quicker. In the end he is granted asylum and tells a fellow immigrant he is looking after his career and does not want to have a girl friend. Maja Jannok Björnström, seventeen years old, is finishing High School. Her school reports are good and, at an interview about her professional choice, she tells the interviewer “ I will always be a Sami”, perfecting the language of her ancestors, and wearing traditional costumes. Samis are still under threat, hate crimes against them are common. At the graduation ceremony, the last one held at the old Town Hall, Maja is just one happy student, like the rest. Meanwhile, at a meeting with the developers of the new town, Vilgats talks at length about the destruction of the old – but others, even the older ones, contradict him, and hope for the best. In the end, we see Vilgats with his dog wandering along the fence, the demarcation line between the old and the new town: deep fog fits his melancholy mood.

DoP Stanislav Adam uses his images to show the beauty of the old and the new. Like the director he is impartial, finding little incidents, like the detonation of yet another part of the old town, directed by the finger tip of a shy young boy who presses the button to show that planning might not solve everything. There is an input for the community, however limited. AS