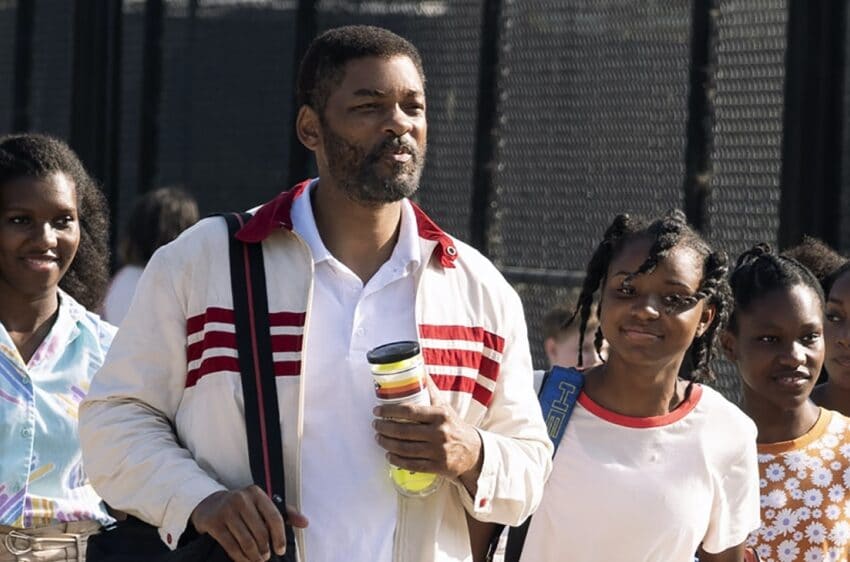 The success story of mammoth tennis stars Venus and Serena Williams was already mapped out well before they hit a single ball, according to this extensive biopic whose focus is their father and tennis coach Richard Williams (a game by Will Smith).

Green and his writer Zach Baylin are keen to play on the sunny side of the former security guard’s character avoiding the more troubled aspects of a man who suffered from delusions of grandeur and narcissism.

We meet the Williams family in the seedy side of Compton, LA, were Richard and Oracene Williams (Ellis) are raising their five daughters, among them Venus (Sidney) and Serena (Singleton) who are coached by their father on the run-down tennis courts of the disadvantaged neighbourhood where a gang of youths give Richard a good kicking until he loses his temper and nearly shoots one of his attackers who is mowed down in front of him by bullets from a passing car.

At home Richard is a domestic tyrant with a work ethic high on his agenda. But he sometimes overdoes it, making the kids watch Cinderalla twice on TV to drill them on the virtues of humbleness. Richard is not a good advert for this particular style of parenting as he always knows best, even arguing with coach Cohen (Goldwyn), who teaches Venus for free.

Finally, Richard takes the whole family to the Florida training centre of coach Rick Macci (Bernthal), where there is a disagreement over how soon his daughters should play competitive matches before their mid-teens. Richard argues that the girls should have a ‘normal’ childhood, and just train hard. In the end, he gives in after Oracene takes Venus’ side. She will make her pro debut at the age of fourteen, falling to the World Number One player Sanchez-Vicario in three sets, after leading for a long time.

Richard struts around in tennis gear most of the time even though he has never played himself. Much time is spent on negotiations between the various companies wanting to sign Venus up for multi-million deals, with her father holding out for a better offer, infuriating Macci and well as his wife. Oracene finally reads Richard the riot act and it becomes clear how much the family relied on her contribution, even though Richard goes on hugging the limelight, turning the girls’ success story into his own triumph even when proved wrong.

DoP Robert Elswit’s images are on the conventional side, as befits a traditional bio-pic. King Richard is a star vehicle for Smith, who turns on the charm and totally  convinces as the prophet who makes things up as he goes along. The serious side of the story is hardly touched upon: William’s dealings with the Klu-Klux Klan is the elephant in the room. Overall, King Richard is overdone with a botched ending that leaves the characters of Oracene as well as Venus and Serena on the touchline, and worst of all, seem to believe in its message, that Father knows best. AS

NOW IN CINEMAS NATIONWIDE FROM 19 NOVEMBER 2021