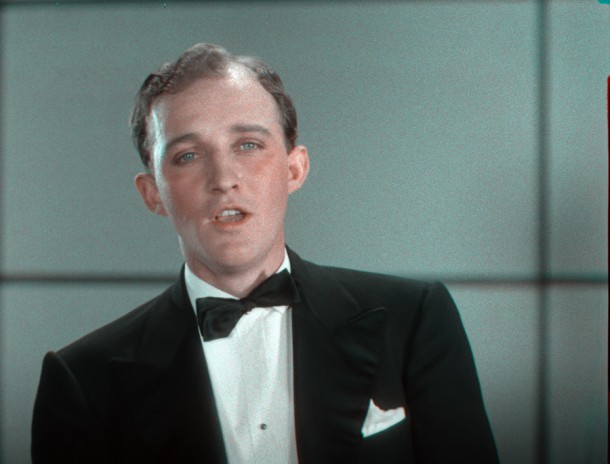 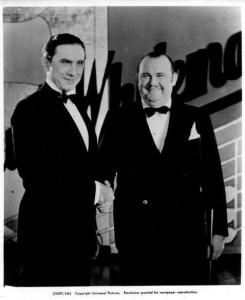 The only film ever directed by Broadway showman John Murray Anderson (1886-1954), KING OF JAZZ was conceived – as the Rhythm Boys put it – as a “super super special special production!” showcasing bandleader and self-proclaimed ‘King of Jazz’ Paul Whiteman (1890-1967) and his music. Having spent over a year in gestation at a cost of nearly $2 million before finally hitting cinemas long after the craze for “all-talking, all-singing, all-dancing” big screen musicals had run its course, despite also being all-colour it was a cataclysmic box office flop when it opened in the spring of 1930. It would have brought Universal to its knees but for the success of All Quiet on the Western Front, released three days earlier; although it was popular enough abroad to break even eventually.

But KING OF JAZZ has enjoyed the last laugh. It exists! And people are still watching it!! This vast, sprawling folly is one of the very few musicals shot entirely in early two-colour Technicolor to have actually survived in colour, has now been restored to something like its original form – and there has never been anything else quite like it!

The Technicolor process in those days was limited to just two primary colours, and sometimes looks almost like sepia; and the strange combination of brick red and sea green does occasionally become a little wearing. The ‘Rhapsody in Blue’ sequence, for example, proved a nightmare to shoot; both because of the intense heat from the lights required (which caused the varnish on the violins to peel and the wood in the pianos to warp) and because despite everyone’s best efforts the Technicolor process as it then existed simply could not manage the colour blue. They eventually had to settle for a Rhapsody in Turquoise. For the magnificent job that he did with the limited palette at his disposal, art director Herman Rosse was rewarded with the first ever Academy Award to go to a Technicolor feature.

The blue eyes of the young Bing Crosby – then one of a trio under contact to Whiteman called The Rhythm Boys – show up vividly in his close-ups, however. Starting with the opening credits (under which the Young Groaner can be heard singing ‘Music Hath Charms’), he occasionally saunters in and out of the proceedings; although his big solo number ‘The Song of the Dawn’ went to John Boles because Bing was in the slammer for a drink-driving offence when it was being filmed.

From the very start the audience is put on notice that they are in store for something unprecedented when we are treated to an animated prologue by Walter Lantz featuring Whiteman himself in what was the first cartoon ever to be made in Technicolor. The makers evidently threw in any bright idea that took their fancy, starting with the introduction of the members of Whiteman’s band by having them climb out in miniature from a valise brought on to the set by Whiteman, following by a magnificently coloured sequence in which they present themselves by playing individual tunes with their instruments. Of the many visual jolts the film supplies the most startling may well be when a very convincing miniature of New York is suddenly invaded by King Kong-sized chorus girls; not to mention Whiteman himself apparently performing an energetic Charleston. As a further bonus much of the choreography and camera angles of the chorus girls (who perform their first routine sitting down) are obviously pre-Code; ditto Marion Stattler being flung about in a very short skirt and frilly knickers to the strains of ‘Ragamuffin Romeo’ sung by the elfin Jeanie Lang. The comic quickies too include a remarkable array of jokes about drunkenness, adultery; and other details like a chorus sheet that pops up in Hebrew wouldn’t have been a feature of the more whitebread Hollywood product later in the decade. (Another comic skit – ‘All Noisy on the Eastern Front’ – plugs that spring’s concurrent blockbuster from Universal).

The pace of the film actually picks up as it progresses, and of the big production numbers themselves, ‘Happy Feet’ is easily the liveliest and most engaging; with Al Norman’s rubber legs flopping around like those of the cartoon Whiteman did in the prologue. The grand finale, ‘The Melting Pot of Music’, on the other hand, goes way over the top in its extravagance and exposes Anderson’s theatrical background by repeatedly shooting the participants as if on a stage (the original director, Paul Fejos would probably have made better use of the famous camera crane he created for the film Broadway).

And then there’s the complete lack of black faces from the final line up. We see bagpipes, Irish harps and Viennese waltzes – but nothing from Africa. Throughout King of Jazz Africa’s contribution to jazz is almost totally ignored, yet there are JUST sufficient acknowledgments of the existence of black people to suggest that the film is attempting to introduce them into the film, but is doing so almost subliminally to avoid offending sensibilities south of the Mason-Dixon line. The only black face we see in the entire film is of a pretty little black girl we see sitting on Whiteman’s lap at the conclusion of the number ‘A Bench in the Park’. Later on Whiteman informs us that “Jazz was born in the African jungle, to the beating of the voodoo drum,” and the ‘Rhapsody in Blue’ sequence begins with the gleaming, dramatically lit physique of black dancer Jacques Cartier dressed as an African chieftain beating that very drum. Less remarked upon is the choice of Africa as the setting for the opening sequence; as if making discreet acknowledgement of the input from that continent by beginning the film there. RICHARD CHATTEN