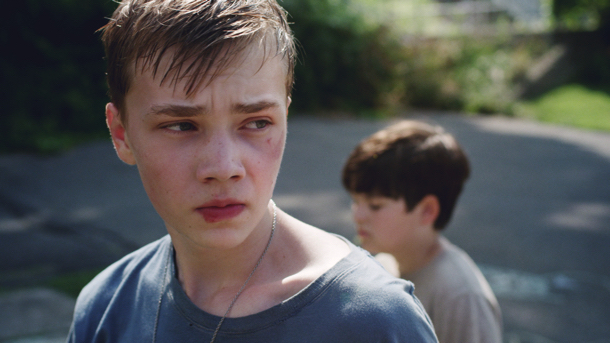 Charlie Plummer plays the Jack in question, the put-upon youngest son of a working class one parent family, who must fight or fall between the cracks, in this poignantly-painted social realist drama.

A visit from his younger cousin Ben (Cory Nichols) gives Jack a chance to pull rank and turn the tables on the little boy in a charmingly protective way never extended to him by his tough older brother or his over-worked depressive mother. This arthouse pleaser is authentically told, the touch is light, fresh and honest, the tone gently playful without ever resorting to sombre sentimentality or hard-edged intent; although the occasional bursts of violence are sharp and short-lived. Not a great deal happens that we haven’t seen before: childhood boyish pranks jostle with pubescent longings and ‘i’ll show you mine if you show me yours’ gameplay, as the boys get to know the local more mature girls. But it’s a winning formula that will keep teenage audiences on tenterhooks and the arthouse crowd immersed in its soft-peddle dramatic tension and its rites of passage storyline.

Plummer gives it his all as a free-wheeling, sensitive 15 year old boy perpetually harried by his brother Tom (Christian Madsen, clearly the son of Michael) with his mother an absent figure in most of his days. He is also bullied by a local mob led by a bolshy Shane and his mates. Keen on a local girl Robyn, (Scarlet Lizbeth) he’s persuaded to take a picture of his penis, which puts him in the line of fire for more humiliation when Shane and his gang attempt to get the better of him once and for all.

KING JACK was supported by The Sundance Institute, and its moody camera work and dreamlike framing, by DoP Brandon Roots, gives the piece the sultry feel of a summer softened by the warmth and verdant background of its Hudson Valley setting. Bryan Senti’s occasional guitar-led score is often softer than the action it accompanies. MT