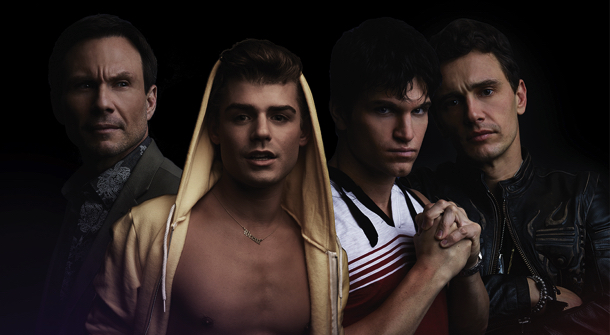 At first Stephen appears to be a relatively low key nonce. He is sadly aware that his ageing looks are a hindrance in bedding desirable under-age men. Although Sean claims to be 18. But delusion is his only bedfellow, and while he  kids himself that Lockhart and he are lovers,  the blond boy-star has other plans. Far too cute to fall in with Stephen,  he swiftly leverages his burgeoning potential by demanding more money from the slippery entrepreneur. And soon enough, perky porn producer Joe (Franco) comes sniffing along and smartly involves Lockhart his boss a ‘ménage à quatre’ with his easygoing partner Harlow ( Keegan Allen) and thus the ‘Viper Boys’ are born, servicing their physical and financial lives. But Joe is clearly also a profligate narcissist with a penchant for fiery temper tantrums when he is thwarted.