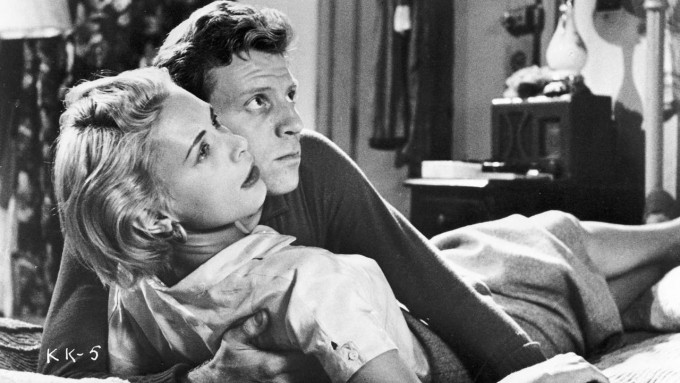 Some directors make perfectly formed debuts: Orson Welles (Citizen Kane); Nicholas Ray (They Live By Night)  and most recently Laszlo Nemes’ Son of Saul, spring to mind. Kubrick was not one of them. You would never guess the man who started with Fear and Desire – 1953 a skeleton in his closet – would go on to direct 2001 A Space Odyssey or The Shining but Kubrick was a fast learner and his technique improved in leaps and bounds with, two years later, his superb second feature KILLER’S KISS.

All Stanley Kubrick’s films are about a conflict of some kind and the New Wave Noir thriller KILLER’S KISS centres on a conflicted boxer who falls for a woman whose conflict come from the outside, her employer. With its Times Square setting and unusual naturalistic style, Kubrick’s KILLER’S KISS kicked off the first American New Wave but tighter techniques: perfect framing and velvety black and white visuals that are painstakingly pristine and unmistakably Kubrick – in contrast to the looser more ambiguous style of Godard and Truffaut’s later Nouvelle Vague.

The story follows boxer Davey Gordon (Jamie Smith) reminiscing about his past when he meets and falls in love with a troubled dancer Gloria (Irene Kane). She is fighting off the unwelcome sexual advances of her boss, nightclub owner Vincent (Frank Silvera). The film’s visually inventive dreamlike first half tightens up as it gradually becomes a more coherent and eventually mesmerising Noir thriller with a tense ménage à trois developing between the central characters as Davey and Gloria distance themselves from the sleazy clutches of Vincent. A nerve-jangling rooftop chase ends in a showcase showdown in a mannequin storehouse – and finally Kubrick notches up the tension for the compellingly weird fight to the death between the two men, with Gerald Fried’s atmospheric score builds to a climax. KILLER’S KISS may be uneven, but the style and energy emerging here was enough to make audiences want more of this fascinating filmmaker called Stanley Kubrick. MT,

KILLER’S KISS IS AVAILABLE ON BLU-RAY COURTESY OF ARROW FILMS AND VIDEO.