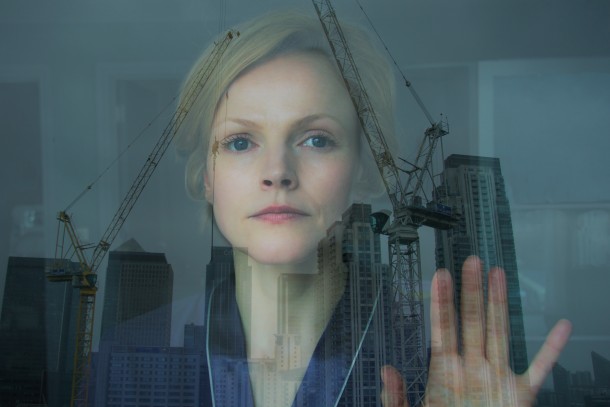 In this chilly urban thriller Maxine Peake plays a ‘stuck-up, self-centred cow’; but is she? Unlucky in love for sure, and (as it turns out), professionally too. As a hard-working Media boss, struggling with the pain of infertility,  all her efforts have been dedicated to building a Media Consultancy and, despite success (as her magnificent Docklands penthouse portrays), she’s tricked in the boardroom for a slice of the rewards by smarmy colleague Tom (Sam Hoare). Love-rat Tom has recently sired a child with his unsuspecting wife (another colleague) but also wants some action with Charlotte on the side. So it’s not easy to be charitable when her cleaner Mykala (Elisa Lasowski) flagrantly defies her ‘no smoking’ pleas, and then steals an expensive bottle of champagne in a stony-faced act of entitlement and revenge. In a fit of pique the two come to blows, and from there on Charlotte’s shiny-looking life implodes as quickly as a party balloon.

Maxine’s Peake rose to fame as a barrister in the BBC series ‘Silk’ and here again she holds court, navigating the odd pothole in her Roger Vivier pumps with suave cool. Resplendent as the efficient ice maiden, her stoical facade melts into patient tenderness when she meets Rosy, Mykala’s baby. The vulnerable and affectionate little girl brings out the best in Charlotte, showing her ability to love and nurture, as she fights back nobly to gain control of the life she’s tried so hard to build. This is a world where strong, beautiful, successful women are seen as a threat: the males want to bed and destroy Charlotte, the female feel threatened and seek to undermine her.  The psychopathic caretaker Roger, (Blake Harrison) acts greedily to leverage his position of control over Charlotte: his precious CCTV footage showing valuable evidence of the incident with the cleaner. In contrast, Charlotte’s sister Sarah (Christine Bottomley) adds a touch of realism, arriving from Manchester all brash and blowsy, to help out in the crisis.  But the sisterhood rapidly breaks down in the presence of the conniving womaniser, Roger, showing what really goes on in women’s minds when the chips are down. The contrast between these two is startling and demonstrate just how much of a self-made woman Charlotte has become, from their modest beginnings up North.

Keeping Rosy is a slim but workable affair, developed by Reeves and co-writer Mike Oughton from a short film Taking Life (2011). Like Jonathan Glazer (Beneath the Skin) Steve Reeves is best known for his commercials work: his ad for ‘Agent Provocateur’, starring Kylie Minogue, had millions of hits on the internet.  This hard-edged Noirish debut feels contemporary and real – reflecting unwholesome truths about the sort of Britain we’ve become. MT