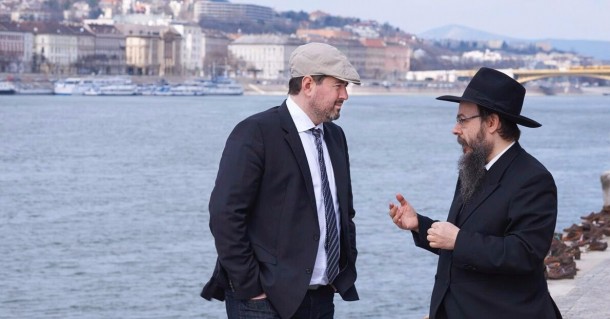 Directors Joseph Martin and Sam Blair have created an impressive portrait of Hungarian fascist turned orthodox Jew Csanad Szegedi, whose conversion seems too good to be true for many. But much more important than the Szegedi story itself, this documentary shows again that many survivors of the Shoah have “kept quiet” not only about their suffering in the camps, but about their Jewish identity as a whole.

When Csanad Szegedi became vice-president of the far-right Hungarian Jobbik Party in 2008, he was only 26 years old. His party would gain 14% of the national vote, and Szegedi was elected as an MEP in 2009. He was also the co-founder of the “Hungarian Guard” in 2007, the paramilitary wing of Jobbik, which modelled itself on the “Iron Guard”, the Hungarian fascist organisation which supported the Horthy Regime from 1920 onwards. This was so radical in its Anti-Semitism that Eichmann said at his trial in Jerusalem: “we had it so easy in Hungary, because the locals were so helpful”.  Subsequent letters from the SS to Himmler revealed the Germans complained about the “unnecessary brutality towards the Jews” of their Hungarian allies.

Szegedi was a violent Anti-Semite, proud of his country’s dealings with the Jews until 1945. But in 2012, a political ally and former skinhead, Zoltan Ambrus, discovered that Szegedi was actually Jewish: his grandmother Katalyn Molnar (née Meisels) was actually deported to Auschwitz; she survived, but hid her tattooed camp number on her wrist, from the family.

Szegedi left Jobbik, and with the help of Rabbi Boruch Oberlander, converted to Judaism: he was circumcised in 2013. His conversion was not always greeted with approval in the Jewish Community: at the Jewish Youth Congress in Berlin, a Hungarian woman, who had to flee Hungary because of the violent Anti-Semitism, accused Szegedi of “faking it”. Others came to the same conclusion: since the media-savvy Szegedi could not be the “King” of Anti-Semitism, he tried to be the King of Judaism. When the newly converted Jew flew to Montreal, to speak at a Jewish Congress, he was not allowed into the country. Rabbi Oberlander had to defend Szegedi to the Jewish community, many of them were angry about the Rabbi’s support for the Hungarian.

The most moving and important sections of the documentary are Csanad’s conversations with his grandmother, and his visit to Auschwitz with the Holocaust survivor Eva ‘Bobby’ Neumann. Katalyn Molnar tells her grandson that she kept quiet about her ordeal, “because “we had been so good at playing out the illusion [to be Christians] and I was ashamed of my tattoo, so I covered it up”. Even after Szegedi talked to his grandmother on her deathbed, he was still n denial about the Holocaust. That would change, when he visited Auschwitz with Neumann, who again talked about trying to hide her experiences:” I never allow myself to show my true feelings”. Confronted with reality of the death-camp, Szegedi caves in “It was really like in Schindler’s List”.  The last word should go to Neumann, who lost all her family on the selection ramp in Auschwitz: “Our souls froze”.

The lesson of KEEP QUIET is that Csanad Szegedi’s fake identity is actually irrelevant. In the event, he has subsequently emigrated to Israel. But the long-term effects of concealing their identity for  survivors of the Shoah, are much more corrosive and important issues: at a time when Holocaust deniers and the never-ending chorus of “let’s draw a line, it was over seventy years ago” gather in strength and find youthful supporters like Szegedi in Hungary, they all should all be reminded that some victims are still alive, and still paying for the crimes of the European Nazis. Hungary is not alone in its official rejection of the truth about the Holocaust. AS