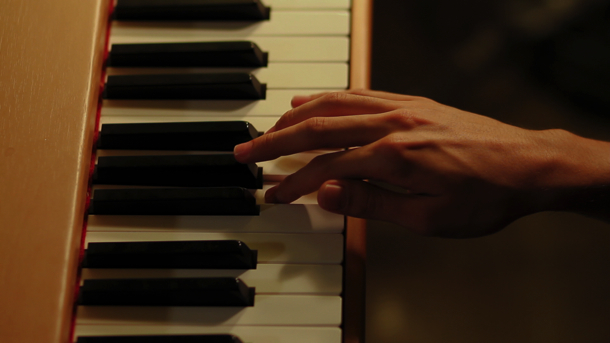 Hicks first full length documentary features the Jazz trumpet legend Clark Terry now in his nineties, and his latest protégé, 23 year old Justin Kauflin, a budding jazz pianist. But theirs in much more that an ordinary master/student relationship: Terry has been suffering from Diabetes for over sixty years, and his eye sight is weakening constantly, albeit slowly. Kauflin, on the other hand, has been blind since being in sixth form. The two of them meet mostly in Terry in Arkansas, Justin being ferried back and forth from  Virginia by his mother, who is a full time carer like Gwen, Clark’s wife and editor on his recent biography, which has just been published.

Alan Hicks highlights Terry’s caring, optimistic nature in this upbeat portrait with fascinating footage and interviews with Miles Davis and Bill Crosby. We discover that Clark Terry was born in Missouri, had ten siblings and grew up in utter poverty, but in contrast, his stellar career led him to play with Count Basie, Duke Ellington and Quincy Jones among others. He was the first African-African staff musician at NBC, playing ten years on the “Tonight” Show with Jimmy Carson. Terry supports Kauflin who has immense stage fright, sometimes being unable to express himself at key moments such as the “Theolonius Monk” competition, when Justin had reached the semi-final stage, but was unable to progress further. Hicks really shows the hurt, the desperation – but afterwards Terry being able to offer more than words, when the two practice again together.

In the four years covered, Hicks shows the subtle development of the relationship between the musicians without resorting to sentimentality: the gradual deepening of the friendship to mutual support and a unique closeness. Whilst there have been famous products of Terry’s “academy”,  such as Dianne Reeves and Terri Lyne, who pay homage to the master, Justin Kauflin will always be very much more than just a student for Clark Terry. KEEP ON KEEPIN’ ON is one of those rare documents of emotional strength; the pursuit of musical perfection which eventually becomes a mutual survival pact. AS