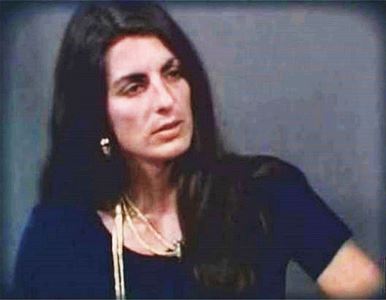 Director/writer/editor Robert Greene (Actress) tries to answer more than one question with his documentary style psycho thriller KATE PLAYS CHRISTINE: he uses the 1974 on-air suicide of US TV newscaster Christine Chubbuck not as an isolated tragedy, but to highlight and explore questions of gender, gun control, news media and the reality of acting.

The documentary part of KATE consists of Sheil trying to retrace the steps of Chubbuck, whilst the re-enacted scenes are purposefully tacky and unsettling, stylistically close to the 70s aesthetics. Central to the film is lead actress Kate Lyn Sheil (You’re Next) who becomes obsessed with the life and death of the tragic newscaster, who seems to have faded from the public memory, dying just short of her 30th birthday. Reading up on the sparse literature which exists on Chubbuck, Kate travels to Florida where Chubbuck lived and worked. Sheil buys a spooky brunette wig, brown contact lenses and uses spray tan to get into character. In Sarasota, always a town of transients and tourists, hardly anyone remembers the dead woman. In an interesting contrast, we see Sheil buying a gun from the same dealer as Chubbuck in the re-enactment. The shop owner admits freely to Kate that everyone answering a few simple questions can acquire a gun “even if he is mad – after all, I am no psychologist”. Sheil also buys fluffy animals, it emerges that Chubbuck’s bedroom resembled more that of a nine year-old girl than a woman of 29.

Greene wants to avoid explaining Chubbuck’s suicide, depression is far too complex an illness to be explained in two hours. Instead he concentrates “on showing the gap between the ‘real’ self and the ‘staged’ one”, a gap, which Chubbuck savagely obliterated. The irony is that her on-screen suicide was a protest against the sensational packaging of news, which is run by men, and Chubbuck’s depression and loneliness was used as an excuse for her objective criticism of the male dominated TV news. The recent events at Fox TV, where millions of dollars were paid to female newscasters for sexual harassment by their male bosses, are proof that the tradition has survived. Chubbuck put all of her energies into her work and to be passed over for promotion by a boss who favoured her male colleague, who then landed the prize job taking with him her best friend at work, was just the last straw.

As for Kate Lyn Sheil, who is as much a collaborator as an actor, the experience of playing Christine Chubbuck has left her convinced that acting is much more than re-creating a person: “What I care about most is trying to give a voice to the lonely and unusual. Empathy is what matters to me. I hope that people watching the movie will feel as bewildered, infuriated and ultimately heartbroken as I did”.

When approaching the re-staging of the suicide, both director and actor came to a solution which does justice to Chubbuck. DoP Sean Price Williams excels with his colour schemes: the cool, cold Sarasota of today is shot in arctic blue, the TV studio is a mass of colours, fighting which each other, the close-ups reveal masks, not real people.
Greene struggles sometimes to keep a unity of the different styles, but Sheil always keeps everything together: unlike Network or the most recent Christine, Kate plays Christine asks question, and lets the audience answer them. An unique undertaking, worth watching as an example for its critical approach of the medium it represents. AS