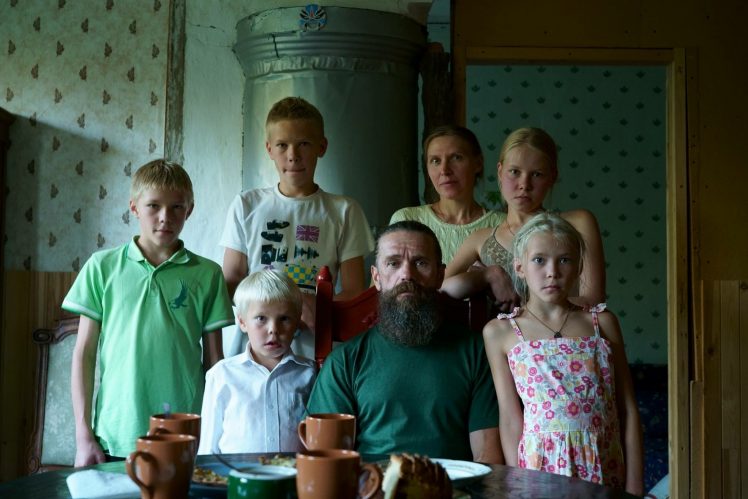 Born in Venezuela and now operating from Spain, director/writer Andres Duque (Dress Rehearsal for Utopia) has created a melancholic portrait of the Finnish/(Russian region of Karelia, which has been at the centre of Finnish nationalism – no lesser patriot than Jean Sibelius composed the Karelia Suite, a document of deep sorrow and longing for the lost souls in the battle for control of the region. Duque opens with a long study of a Karelian family, before suddenly switching to contemporary Russian interference in the affairs of the present, caused by the bitter historical past.

Arma and Arkady Pankatrev live with their five children in an idyllic country location, where the children often roam free – like a mix of Rudolf Steiner philosophy and Summerhill (non) schooling. The parents are Shamanists and the children join in the sessions, where old books are read, and everyone is encouraged to free-associate about the magic of paganism. “Tell us, what you see”, Arkday encourages the children, “we are with you”. There is much poetry, like “A flower springs up for some reason”.

Then we learn about the building of the Belomorsk Canal in the late 1930s, and costing many lives, particularly those of the Gulag prisoners. Nikita Khrushchev held a eulogy on Stalin in 1937 – twenty years later he would denounce him as a tyrant. Arkady talks about how the Stalinist destroyed the Orthodox churches. Urjo, one of the young boys, is catching frogs and spiders, at night he holds on to his worms and ants. ”You think like a human”, his mother tells him, implying that animals might be a more developed species.

There is a huge stone memorial for the victims of Sandarmoh: between 1934 and 1941 over 7000 innocent people were killed in the Stalinist purges. “Birds have never sung again in Sandarmoh”. Today this history is being repressed by Putin: Katherina Klodt, the daughter of Yuri Dmitriev, bemoans the trials he has to face, for keeping the memory alive. He is accused of having abused his step daughter, even so the evidence is more than flimsy. Katherina tells an audience that the former acquittals of his father have been squashed. “It started with his speeches in 2014”, she said, when he talked about the many nationalities who suffered, like the Ukrainians. Putin has created a Military Historical Society in December 2012, which is used to cover up genocides by the Soviets.

Whilst Karelia is very informative, the change from the poetic country setting to the nitti-gritty of Putin’s contemporary revisionism is hard to take. They are obviously connected, but the aesthetic clash is rather jarring. AS