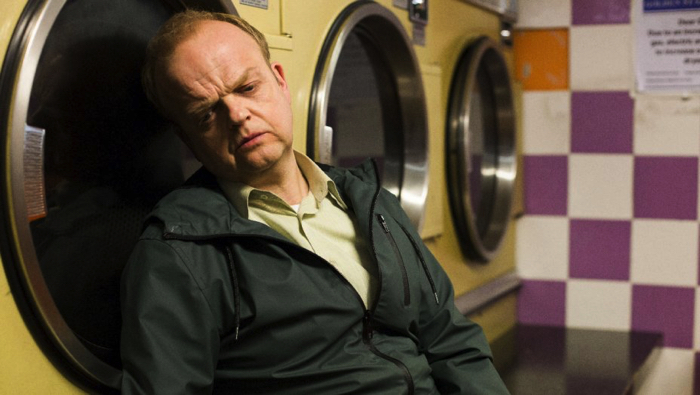 British director Rupert Jones keeps it in the family with this surreal and nightmarish psychological thriller, enhanced by yet another standout performance from his brother Toby as the tortured anti-hero.

Set in a large London Housing Estate, where Carl (Jones) lives in a pokey flat – a throwback to the 70s. We learn that he has moved in a year ago after being released from prison where he’s done  time for a serious crime. One morning Carl wakes up to find the body of a young woman in his bathroom. His memory serves up a meeting with her, she was called Abby (Matthews), they danced and he might have locked her in the bathroom. When he walks up the stairs, the staircase becomes a kaleidoscope, it seems to strangle him in continuous twists and turns. The police show up, and so does a helpful neighbour, Monique (Noble). Toby is convinced of some wrong-doing – but can’t think what, exactly. When his mother Aileen (Reid) invites herself over- very much against his will, the images of Abbey and Aileen mingle, Toby certainly suffers from displacement activity – a repressed guilt complex, exposed in the final reveal.

This is 10 Rillington Place meets Kafka’s The Trial: spookily Jones even looks like Richard Attenborough as the murderous landlord. The grimy atmosphere in the flat is another parallel – but while Attenborough’s John Christie was sheer evil, Carl is suffering from past trauma. He hectically tries to cover up the traces of whatever he might have done; objects, he wants to destroy or find, becoming his enemies. Carl is paralysed: whenever he meets authority, be it the police, or his boss at the garden centre, he goes into meltdown. His anxiety grows the longer Aileen stays in his flat. And when she reveals she has bone cancer and wants to spend a lottery win on a last family visit to Canada with her son, Carl is close to breaking point.

Kaleidoscope is crucially “a psychological thriller, a tragedy, but not a horror feature”. The score, using a harp concerto by the German/American composer Albert Zabel, underlines Carl’s feeling of tension. The whole film resonates with Hitchcock,  particularly in the way the staircase is shot. It also brings to mind Bernhard Hermann’s score for Hitchcock’s Vertigo: But whilst Scottie was suffering from Vertigo (and love sickness), Carl is haunted by a past he has yet to understand fully. DoP Philipp Blaubach (Hush) creates elliptical camera movements, showing Carl permanently fleeing from himself, the long tracking shots mark him like a hunted animal. Overall, Jones has made the most of his limited budget, avoiding any gore, and staying consistently on a psychological level. AS

On UK digital platforms on 12 August 2019, followed by its DVD release on 23 September 2019. The cast includes Sinead Matthews (Jellyfish), Cecilia Noble (Danny and the Human Zoo) and a stand out turn from national treasure Anna Reid, MBE (Last Tango in Halifax).