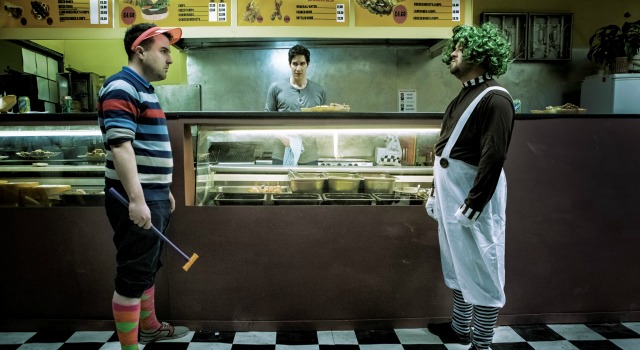 Dan Pringle’s confused but stylish K-SHOP has something of the modern day Sweeny Todd about it. Certainly not for the faint hearted: blood and gore dominate in repetitive sequences along with disgusting bodily functions showing Pringle to be self indulgent in a debut that grimly outstays its welcome, and some. But far more questionable is Pringle’s treatment of serious issues such as racism and vandalism with the over-use of  over-the-top, sensationalised aesthetics to hammer home his point – quite literally. Performance-wise there is a particularly strong turn by Abaza, but K-Shop is somehow too muddled and contradictory to be taken seriously.

Briefly, the plot centres on Salah (Abaza), a Middle Eastern political science student who is shocked when his Kebab shop owning father dies at the hand of hooligans. Taking over the joint, he soon falls foul of late night revellers who raise hell one night, racially insulting Salah into the bargain. But when a rowdy victim falls into a pan of chip fat, Salah decides to take the law into his own hands with disastrous consequences for the troublemakers, but positive feedback from his customers. As they say on TV: best not to try this out at home. That said, K-SHOP is the kind of brutal fare that will go down very well at Fright Fest.