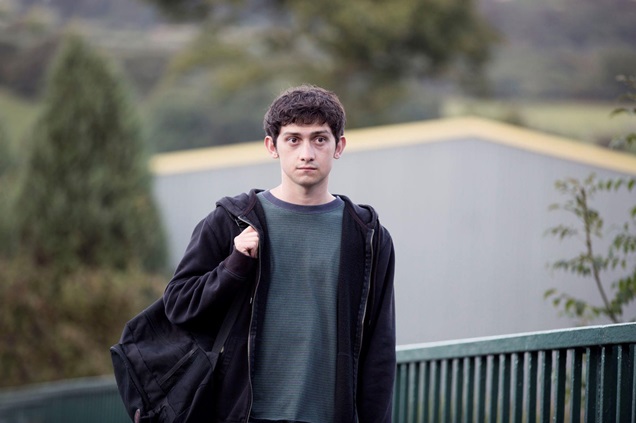 Craig Roberts first surfaced to cineastes’ consciousness in Richard Ayoade’s sweet drama Submarine. A hundred years has passed since O A C Lund’s silent original flashed onto the silver screen and Roberts’ quirkily dark comedy JUST JIM, his debut as a filmmaker, is a fitting tribute to sardonic Swede.

Set in the dystopia of the dull as ditchwater Welsh village, Roberts takes the eponymous central role as a deeply shy and fearful teenager. Success here comes from its 50 retro feel and brilliant cinematography, courtesy of Bafta award-winning lenser, Richard Stoddard, to create a darkly comic vibe with similar framing and attitude to a slow-mo sombre Hal Hartley outing. The humour derives largely from the clever casting of US Emile Hirsh who, as Jim’s American neighbour Dean, injects a much-needed confident noirish swagger into the stultified atmosphere of the buttoned up Welsh backwater. Taking the painfully sensitive Jim under his wing, he starts to re-style the geeky village loser as the hottest thing that ever hit town; both with the boys and the girls. But Dean is not as good as he seems, and gradually Jim comes to learn that, even as his new and cool persona grips the glowering neighbourhood, trying to be special is not always as desirable at it seems.

Scriptwise, things are wobbly though and the entertainment and charisma is largely down to the strong performances of Hirsch, Roberts and his onscreen wannabe pink-haired squeeze, Jackie (Charlotte Randall). Roberts’ direction is charmingly kickarse and buzzes beautifully to Michael Price’s edgy original score. Clever collaborative choices on Roberts’ part makes JUST JIM a stylish and inventive debut MT