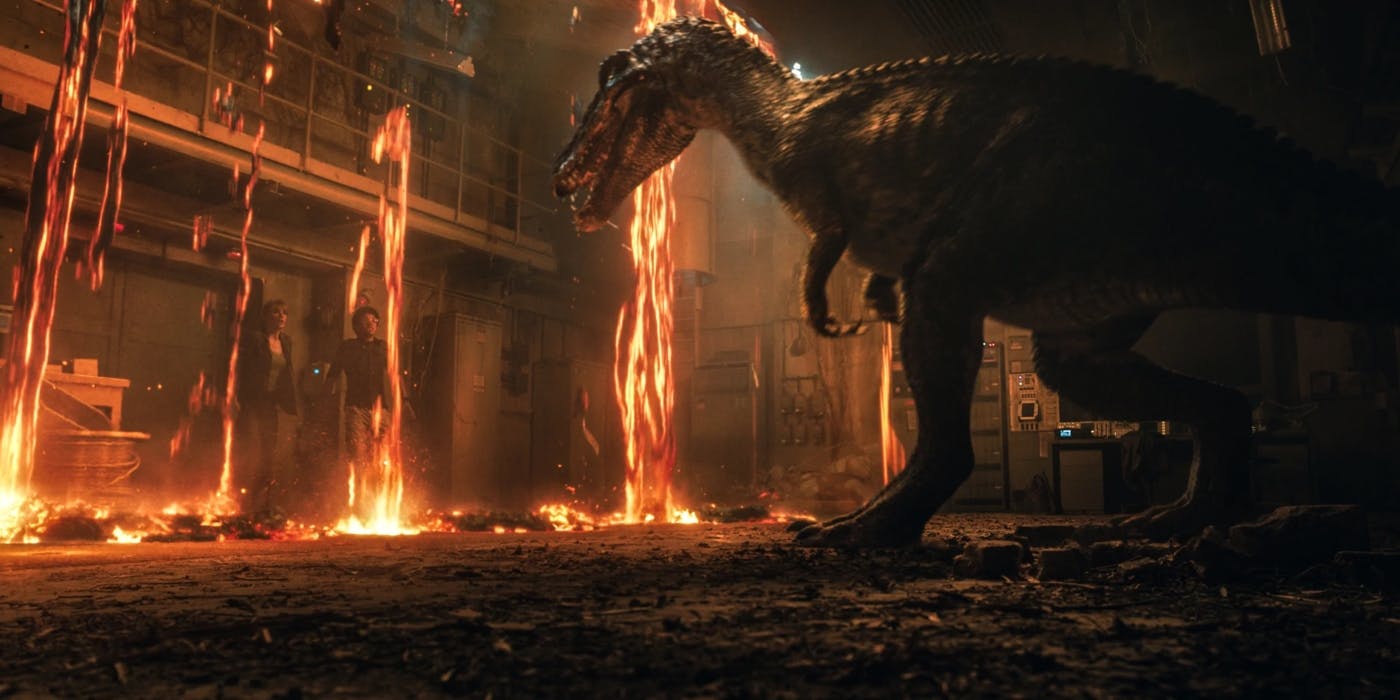 Director J.A. Bayona (A Monster Calls) and his regular, fellow Catalan DoP Oscar Faura have delivered the fifth instalment of the Dino franchise, with Fallen Kingdom being the middle piece of a trilogy. Despite some visually stunning set pieces (and a budget to match), the script by Colin Trevorrow and Derek Connolly is as weak as their work for Fallen Kingdom’s predecessor Jurassic Park (2015).

This new outing sees the dinosaurs on the Isla Nublar threatened by an erupting volcano. Dino lovers Owen Grady (Pratt) and Claire Dearing (Howard), still lack a convincing chemistry and are called back into a rescue mission with their sidekicks Dr. Zia (Pineda) and Franklin (Smith). Unbeknown to the quartet, back in Lockwood Mansion Sir Benjamin (Cromwell) is dying and his wicked CEO Eli Mills (Spall) has teamed up with Super-Baddie Gunnar Eversol (Jones), to trade the surviving dinosaurs to the highest bidders so they can be genetically altered and used as fighting machines. After Lockwood’s  death, his granddaughter Maise (Sermon) takes over the good fight having lost her last ally, a Mrs. Danvers-like housekeeper (Chaplin). While the auction of the rescued animals is in full swing, Maise is finally joined by the foursome in her fight to thwart the greedy usurpers.

Shot in CinemaScope (240:1 ratio) with an Arri Alexa 65, digital debutant Faura deftly masters the mix of animatronix and CGI, using older lenses in place of the latest ones – as digital’s lack of depth tends to look hyper real. Having said this, the folio on the island does appear to be a little bit too rubbery….

There’s nothing really new here: once again we get a reprise of the fight between the good flying dinosaur (Blue, Grady’s lead Dino) and the baddie reptile; and when they eventually fall through yet another glass roof, there’s a maddening sense of déja vu. Fallen Kingdom never makes its mind up if it wants to be a disaster movie or a Bond flic with a great finale. The 128 minutes running time outstays its welcome without any justification for doing, and the ending, prepping us for a planned third outing of the rebooted franchise, is only secured by a mind blowing act of unbelievable wilfulness. AS