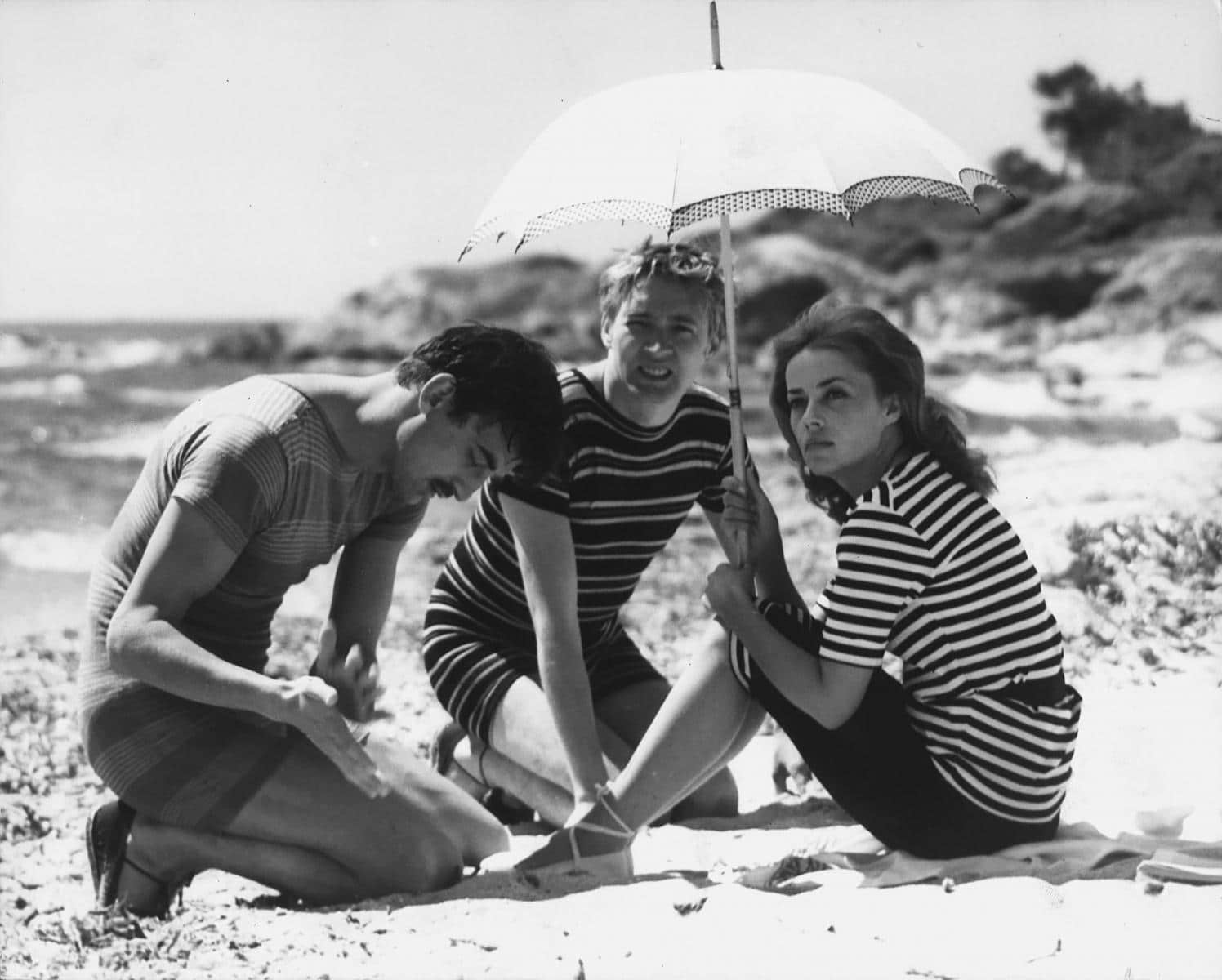 Covering the time between 1912 and 1935, the script adapted by Truffaut and Jean Gruault follows German writer Jules (Werner) and his French counterpart Jim (Serre), who meet in Paris. Jim is a hedonistic womaniser (very much like the novelist Roché) whereas Jules is serious, self-pitying and naive, clinging to abstracts and words rather than actions. They both fall in love with Catherine (Moreau), who is the polar opposite of Jules who she ends up marrying, against Jim’s advice.

The marriage is a disaster, but the war intervenes, the two men fighting on different sides and afraid to kill each other. After the war, Jim goes to see Jules, Catherine and their daughter Sabine (Haudepin) in a small village in southern Germany. Catherine is unhappy, and Jules asks Jim “not to see me as an obstacle” in making love to Catherine. The ménage-a trois is a happy one, but Jim can’t tear himself away from Paris and patient girl friend Gilberte (Urbino), with Catherine’s passionate jealousy ending it all. The trio meet accidentally in Paris in 1934, watching a newsreel about the Nazis burning books. Catherine’s revenge is as brutal as its imaginative and leaves Jules bereft alone in a world which he never understood.

The casting of Moreau made Jules et Jim from a “film d’auteur” into a “film de comédienne”, as Claude Mauriac put it. Arguably, the great DoP Raoul Coutard also owns more of the feature than the director. Coutard’s roving camera, old-fashioned fade-outs and languid tracking shots creates an unreal atmosphere, keeping the audience at the whim of the changing camera angles, just like Jules is permanently wrong-footed by life and his love for Catherine.

Jules et Jim was certainly the high point in Truffaut’s career. His next feature, La Peau Douce (1963/64) would be his last in black-and-white for a very long time; but the change to colour was not only an aesthetic choice. Despite the radical ending, La Peau Douce (like most features which followed) were very much a return the French cinema of quality and psychological drama Truffaut had attacked so vehemently as a critic. AS

FRANÇOIS TRUFFAUT SEASON ON BFI PLAYER & AT BFI SOUTHBANK
The BFI’s celebration of film critic-turned-director, François Truffaut takes place across the UK during January – February 2022 to include a two-month season at BFI Southbank and BFI Distribution re-releases of THE 400 BLOWS and JULES ET JIM.

LES MISTONS (THE MISCHIEF MAKERS) (1957)
A group of boys have a crush on a girl called Bernadette. As they are jealous of Gérard, her lover, they try to disrupt their relationship. When Gérard catches one of the kids spying on them, he thrashes him severely. In retaliation, the boys attempt inspiring Bernadette to doubt Gérard’s love.

SHOOT THE PIANIST (1960)
Charlie is approached by his crook brother Chico, who is chased by two gangsters. Charlie helps him to escape, but he upsets the criminals, so when his brother Fido is kidnapped, Charlie has to take an attitude with tragic consequences.

ANTOINE ET COLETTE (1962)
Now aged 17, Antoine Doinel (introduced in THE 400 BLOWS) works in a factory which makes records. At a music concert, he meets a girl his own age, Colette, and falls in love with her. Later, Antoine goes to extraordinary lengths to please his new girlfriend and her parents, but Colette still only regards him as a casual friend.

STOLEN KISSES (BAISERS VOLÉS) (1968)
It’s 1968 and the forever lustful protagonist of the Antoine Doinel series, has been discharged from military service. He stumbles into a position assisting a private eye where many misadventures, romantic and otherwise ensue.

BED AND BOARD (DOMICILE CONJUGAL) (1970)
Antoine has married his sweetheart Christine, and the couple have set up a cosy life of selling flowers and giving violin lessons while Antoine works on his long-gestating novel. As Christine is pregnant with the couple’s first child, Antoine finds himself enraptured with a young Japanese beauty.

ANNE AND MURIEL (AKA TWO ENGLISH GIRLS) (1971)
At the beginning of the 20th century, Claude Roc, a young middle-class Frenchman, befriends Anne, an Englishwoman. While spending time in England with Anne’s family, Claude falls in love with her sister Muriel, but both families lay down a year-long separation without contact before they may marry.

UNE BELLE FILLE COMME MOI (SUCH A GORGEOUS KID LIKE ME) 1972)
Stanislas Previne is a young sociologist, preparing a thesis on criminal women. He meets Camille Bliss in prison to interview her. Camille is accused of murdering her lover Arthur and her husband Clovis. She tells Stanislas about her life and her love affairs…

LOVE ON THE RUN (L’AMOUR EN FUITE) (1978)
Antoine is now thirty, working as a proofreader and getting divorced from his wife. It being the first “no-fault” divorce in France, a media circus erupts, dredging up Antoine’s past. Indecisive about his new love with a store clerk, he impulsively takes off with an old flame.

THE WOMAN NEXT DOOR (LA FEMME D’A COTE) (1981)
Two ex-lovers wind up living next door to each other with their respective spouses. Forbidden passions ensue.

FINALLY, SUNDAY! (VIVEMENT DIMANCHE!) (1983)
Based on ‘The Long Saturday Night’ by Charles Williams, the story is set over the course of a few nights in a small town in the South of France. Julien Vercel, director of an estate agency, finds himself suspected of a double murder: that of his wife, Marie-Christine, and her lover, Claude Massoulier. As circumstantial evidence is against him and a third murder is attributed to him, Vercel takes off to escape the police. His secretary, Barbara, conducts her own inquiry in a bid to find out the truth and gets herself into some worrying, unexpected situations.