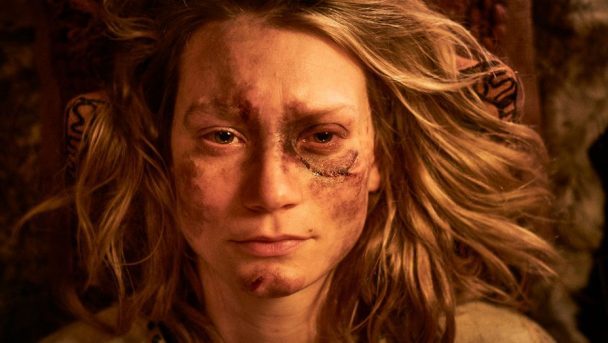 Australian actor turned filmmaker Mirrah Foulkes creates a full-on fairytale with a feminist twist that doesn’t pull its punches. A brilliant cast is led by Mia Wasikowska in this tonally off kilter comedy-drama that champions the resilience of women in a man’s world.

For a first feature this is wacky but wonderful stuff that makes use of magic tricks and  slapstick in a 16th-century village called Seaside – the joke is on the not very bright denizens, as the place totally landlocked. Said locals are not only slightly retarded, they are downright vicious, particularly when it comes to their treatment of women. There is a regular ‘Stoning Day’, and if anyone is unlucky enough to have her chickens die on that day, stare at the Moon too long or develop a rash – they are stoned to death.

Puppeteers Punch (Herriman) and Judy (Wasikowska) run a regular show that recently suffered from Punch’s boozing and violent temper. Judy is the most gifted of two and she soon emerges as the stronger. While preparing for the latest show Punch’s cruel nature once again rears its ugly head undermining her efforts to win back the audience. A tragic incident does not lead to  contrition on his part, and he makes matters worse by nearly beating his wife to death, before dumping her in the forest. He then blames their endearing servants Maud (Palmer) and her dementia-ridden husband Scaramouche (Norris), the mild protestations of police officer Derrick (Hardie) brushed aside. Meanwhile, Judy has been found in the woods and recovers to reek her brilliant revenge.

Foulkes certainly has a penchant for camp in the hotchpotch of just about everything. Herriman’s Punch channels Captain Sparrow, his charm masking a violent personality. Joined by a motley crew of villagers who dance around in Renaissance rig-outs rehearsing their tai chi moves in the ancient forest. Whether to laugh or cry or even recoil in horror, is entirely up to you. That said, DoP Stefan Duscio’s wide-screen images are impressive, his imagination running riot. Wasikowska rises to the occasion as an enterprising young woman, taking on her husband and the entire in the feisty finale. But the contradictions somehow spoil the enjoyment: swinging between utter farce and black comedy the audience loses its bearings too often. And in spite of some strong ideas and a wonderful  Wasikowska, Judy & Punch never really catches fire. AS