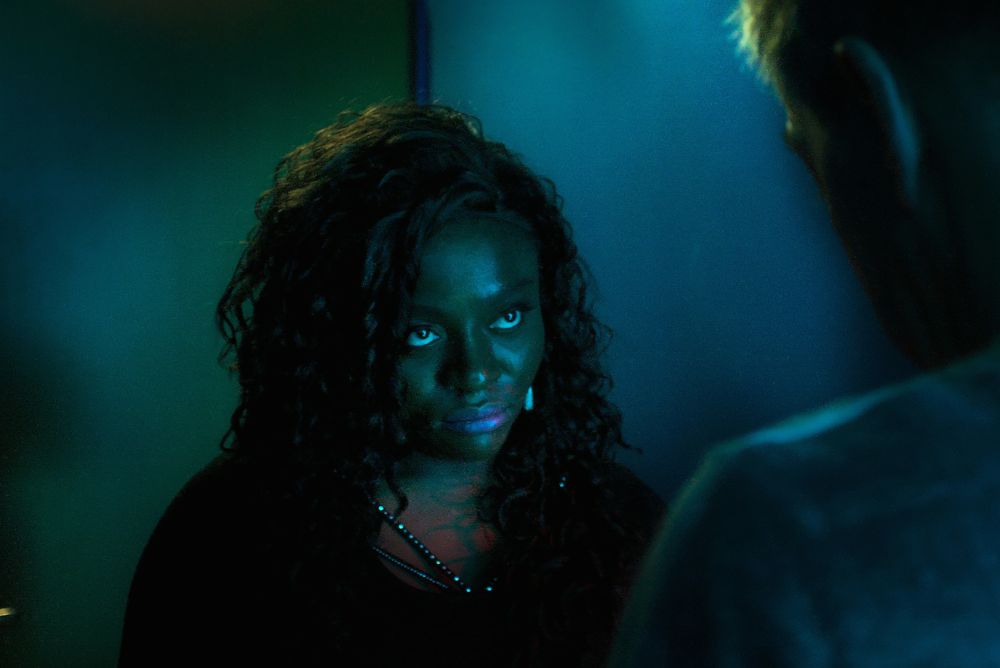 German born writer/director Sudabeh Mortezai (Macondo) spent her youth in Vienna and Teheran before studying film at UCLA. Her second feature is centred around Nigerian women sold by their families as sex-workers to Europe. In the prologue, we see the local shaman performing the ‘Juju’ ritual on one of these young women: the victims have to leave an intimate part of themselves behind so they don’t run away, and send money home regularly.

We meet Joy (Alphonsus) on a dark night Vienna where she is soliciting. Next to her stands young Precious (Sanusi), who has just arrived from Nigeria and does not want to sell her body, to pay back Madame (Pius), whom she owes 60,000 Euros. Back in the flat, where the girls live in cramped  conditions, Madame holds Joy responsible for Precious’ attitude and tells her that her debt will increase if she doesn’t encourage the young girl to work harder. For good measure, Precious is than raped by two men, her cries of help going unanswered. The brutal treatment makes Precious fall into line and she becomes the highest earner of the group. Madame expresses her thanks by selling her for a profit to Italian pimps.

Meanwhile Joy and Precious are continually pestered by their families to send more money home. Joy’s family ‘invents’ a fake illnesses so her clients will take pity and pay her extra.  And Precious’ mother asks her to sleep with more more men: “Can you imagine, the woman who gave birth to me wants me to do do that!” Joy, who has a daughter Chioma (Okoh), for whose upkeep she pays a nanny, is sent with Precious to the Italian border, keeping her passport. Precious asks her many times to relinquish the passport, so that she can escape. But Joy is well aware that Madame’s vengeance would be be grim, and she reminds Precious: “This is a game of survival of the fittest. I would kill you if I needed to. Do not trust me!”. Her calculation proves right when Madame ‘releases’ her, which is not so generous as it looks since new and younger girls have arrived from Nigeria.

The director takes a detached approach throughout. The gruesome details of the women’s suffering – Joy is bleeding heavily after being raped by three men, but Madame does not allow her to seek medical help. The whole circle of violence, starting in Nigeria is repeated over and over again, because the authorities in Austria want Joy to testify against Madame, but won’t grant her immediate asylum.

JOY explores a real and continuous nightmare that is happening all the time, in nearly every European city. Shot starkly by DoP Clemens Hufnagl, mostly at night, the few interior scenes reveal the misery and fear that haunts women daily. A depressing but worthwhile film. AS