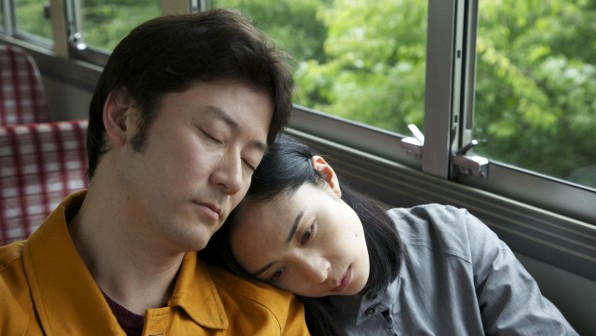 This type of ghost is well known classic in Japan and has long-existed in Japanese kwaidan (horror) films but also in Shakespeare. In JOURNEY TO THE SHORE a completely new form of death appears. The figure here is different from the usual ghosts. Carried away by a temporary death (or physical death), Yosuke will remain in the world for three more years allowing him to prepare for his spiritual death. A certain Karma comes back into these meetings between as the couple as they delicately explore the unfinished business of their married life in a spiritual limbo that shifts backwards and forwards between the living world and the afterlife. And although this premise appears captivating at first and sets off with the best of intentions, JOURNEY TO THE SHORE is gradually becalmed by its rather dull pacing as sentimental tedium engulfs the shady interiors where the supernatural story mostly unfolds.

Loosely based on a novel by Kazumi Yumoto, the films opens with a scene that is re-worked quite movingly later in the story, and showing Mizuki teaching piano to one her pupils, a young girl whose mother blames Mizuki’s lack of enthusiasm for her daughter’s musicial ineptitude. Mizuki is clearly depressed and shortly after this episode, her dead husband Yusuke (Tadanobu Asano) makes the first of his haunting visits, three years after his death. The first time he appears, she listens quietly, hardly perturbed by his homecoming (and looking so well into the bargain), he describes his death by drowning. The following morning, she wakes up and discovers her husband is still there. Promising to show her “beautiful places,”, the two then embark on a journey to meet the circle of people who have become part of his afterlife in the intervening years.

There is the newspaper seller  (Masao Komatsu); the owners of a dumpling restaurant (Nozomi Muraoka, Tetsuya Chiba), whose daughter died some years earlier; and a nice old man (Akira Emoto) whose daughter-in-law (Kaoru Okunuki) has fallen on hard times, losing both her husband and her mind. It emerges that Mizuki’s husband has become a philanthropic teacher since his ‘death’.

There appears to be a pattern here whereby the living are somehow released by these undead people when they eventually find peace in the shadowy afterlife. And this is where we are introduced again to the piano student playingwith much more feeling  than she did before. And in the final scenes, when Yusuke’s journey is almost over, he eventually reaches a kind of karmic reunion with his placid wife. JOURNEY TO THE SHORE is a lovingly-crafted musing on death and the afterlife, hampered by the lack of convincing chemistry between the leads who, although impressive in their rather underwritten roles, fail to set the night on fire as a happily married couple and leaving us unmoved by their suffering or by their redemption.

JOURNEY TO THE SHORE tries to be mysterious and intriguing but its failure to achieve this arises largely out of the torpor of its narrative flow that lacks conviction and dramatic punch, coming over as winsome rather than emotionally involving. MT