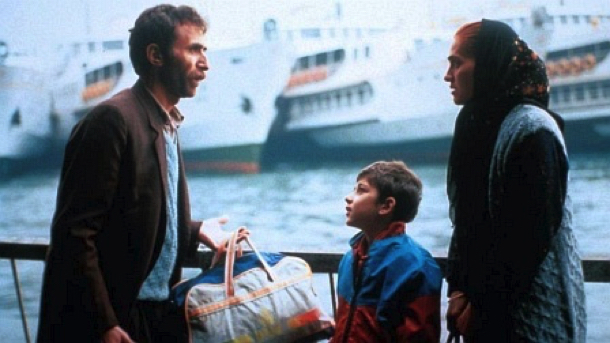 Swiss director Xavier Koller’s road movie was the first in the crop of immigration stories that now feels rather dated but still relevant with its poignant humanist appeal and Elemer Ragali’s imaginative cinematography capturing the magnificent scenery of Northern Turkey and Switzerland. In 1991 Journey of Hope won the Oscar for Best Foreign Language film firmly nudging Jean-Paul Rappeneau’s Best Costume Winner Cyrano de Bergerac out of the way. Its simple but cumulatively gripping linear narrative follows a Kurdish family who naively imagine a better life in Switzerland.

For Haydar, his wife and young family life is tough but reasonably happy in their modest smallholding in Southeast Turkey. But their journey of hope soon becomes one of despair when they sell all their possessions to fund the passage to paradise, as portrayed by images of cuckoo clocks and Swiss chocolate that Haydar buys in his local village grocery store.

Unscrupulous traffickers have now become daily headline news, but 25 years ago they were still the relatively unknown root of transmigration, taking ready cash in return for a perilous and often unsuccessful voyage to Europe. And we soon discover that the family’s sea passage as stowaways and onwards across the snowbound Swiss Alps is a dangerous and misguided one that provides a hefty dose of drama as the entourage stumble across treacherous terrain weighed down by their prized possessions. Predictably fatalistic, Journey of Hope is nonetheless as harrowing and resonant today as it was several decades ago but its characters’ touching humanity and genuine honesty is what really makes it appealing as a story and the performances by the ensemble cast are genuinely moving. Naive they may have been, but there is something laudable about their desire to seek a better life tempted by a picture postcard portraying perfection in the Swiss Alps, and based on the enduring and misguided belief that the grass is always greener on the other side. MT