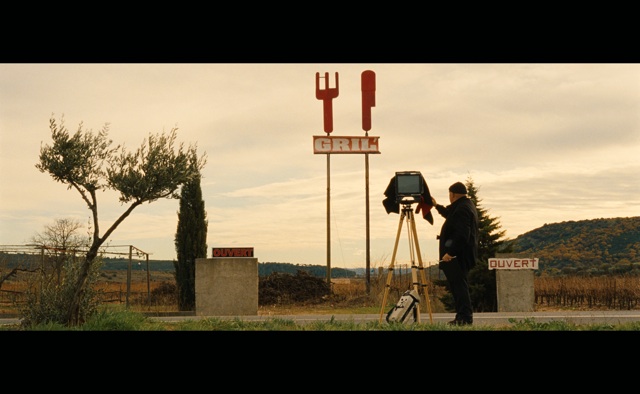 The title of this informative and innovative documentary is a little misleading: whilst we see and witness Raymond Depardon travelling through provincial France with his old-fashioned view camera, filming buildings which look right out of the fifties. We also see his work as a documentary filmmaker, shooting conflicts worldwide. Depardon and Nougaret have lived and worked together for over 25 years, and this is also a homage to their work. We first meet Depardon in Nevers where he is taking a photo of a tobacconist shop, unchanged for over fifty years. Depardon”s explanation for his journey through France is that he needs “silence after having listened to others for such a long time”.In 1962 Depardon, who grew up on a farm, went to Paris to become a photographer. The following year he was sent to Venezuela to photograph the civil war – completing the coverage single-handedly after the director and sound recorder quit. A year later he was in the Belgian Congo, Brazzaville, where a new president was being sworn in –none other than Bokassa, the infamous dictator, who then came across as rather a civilised, well-intentioned human being.

In 1967 Depardon founded with others the agency “Gamma”, in his own words “not for money, but to make us free”. He then set off to Biafra to witness the slaughter of the civil war – and also to the ones who caused it: the French mercenaries, who were self-satisfied and proclaimed that “there will be also well-paid work for us”.   A year later he visited Prague, after the suicide of Jan Pallach, as a reaction to the Soviet invasion. Depardon was put in prison for three days before being expelled.

All this is fascinating background detail is skilfully intercut with footage of the tranquil French countryside, Depardon explains “I am in an orbit, my camper van is my capsule”. In 1974 he filmed the presidential election campaign of Giscard, the then finance minister of France. In a meeting before the decisive second round of voting (Giscard would beat Mitterand by 0.8%), the future president proclaims proudly, that they would need not to do anything, since “Le Pen’s National Front followers will vote for us”.  When in office, Giscard blocked the release of the film. This is followed by a heart-breaking interview with the kidnapped French ethnologist Françoise Claustre in Chad.

Depardon lived two years with the rebels, and was instrumental in her release, after three years captivity. That same year he shot a depressing film about mental patients in Italy, who lived under scandalous conditions; an anti-psychiatric movement was founded, and conditions changed.Depardon raison d’etre was to make documentaries about people in confrontation with the authorities. His films about the Justice System in France or his observations in an ambulance (1982) when the driver innocently “wished that he also could find a hanging case, like his friend had the other day”. In 1993 Nougaret developed a direct sound system for “Paris”, where the filmmaker couple shot people in the Paris streets.

One highlight of his long career is doubtless an interview with Nelson Mandela just after the release from prison in 1993.So much more is showed and mentioned in this remarkable doc – JOURNAL DE FRANCE is a kaleidoscope of the bloody and the ordinary struggles of men, in France and worldwide – shot by a couple who stayed together, in spite “of constant bickering” on one of their first joint adventures in “Captive of the Desert” (1990), when they got completely lost. AS

JOURNAL DE FRANCE IS ON GENERAL RELEASE FROM 31 JANUARY 2014