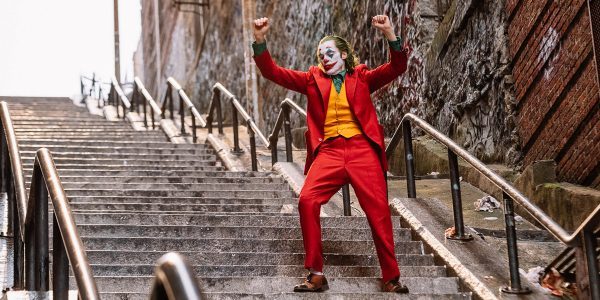 September 30th, 2019
Author: Meredith Taylor
Dir: Todd Phillips | Cast: Joaquin Pheonix, Robert De Niro
Joaquin Phoenix coruscates with desperate anger as a tortured mentally ill loner in Todd Phillips’ tale of the age old arch-nemesis. Imagine Taxi Driver ten years on without the heart and soul of Scorsese or Bernard Herrmann’s iconic 70s score; add some hyper violence and a dose of livid desperation and you have Joker, another rich character study not for the feint-hearted.

Robert De Niro also stars as a glib gameshow host Murray Franklin but this is Phoenix’s film and he is a firecracker as the disgruntled and delusional Arthur Fleck tending his ailing mother whilst trying to juggle various jobs, gradually losing his sanity. He is also cursed with a corrosive condition forcing him to cackle with laughter – uncontrollably and mostly inappropriately – whenever he is stressed or put upon. One such incident occurs in the opening scene where he is chased down and beaten up by kids who steal his sale placard.

Shocking in its sheer intensity, Joker is a film for everyone who has ever been scorned or short-changed, so that’s just about everyone. Joaquin Phoenix looks as if he nearly died preparing for the role, his emaciated body and strung out demeanour testament to the sheer dedication of an actor at the top of his game – thoughts of quitting should now be way behind him.

Phillips and Scott Silver’s script is not based on any of the DC Comics oeuvre, but its resonance will delight an eager fan base. In Gotham City, inspired by New York of the same era, Fleck is also fond of his role as a clown, and he is good at it. Strutting his stuff in the local children’s hospital but also imagining himself performing as a stand-up comedian – one of his jokes is “let’s hope my death makes more cents than my life”.

After the street punch up Fleck is lent a gun by a workmate, but foolishly incorporates it in his act at the hospital, a mistake that leads to his sacking and final down-spiralling. One night in the tube he becomes trigger happy when taunted by some City workers and is soon running for his life, the sheer payback exhilaration infecting the audience with complicit delight as he becomes everyone’s misguided ‘have a go hero’.

Without revealing the rest of the plot, let’s just say Arthur makes one bad choice after another. And when certain facts come to light about his family and background, he morphs into a fully fledged psychopath not caring what happens next – to him, or anybody else’s for that matter.

Phoenix brings a scathing humanity to a tragic soul in crisis. Even a romance with a neighbour Sophie (Zazie Beetz) seems to be a figment of his shattered psyche as he descends into a hellish underworld of his own making. Although technically brilliant you have to question the sheer level of the gratuitous violence. That said, this cuastic moral tale will leave everyone with a vague sense of satisfaction and sadness as Joaquin struts his stuff to Gary Glitter’s 1972 hit Rock and Roll, part 2. MT

ON RELEASE NATIONWIDE FROM FRIDAY 4 OCTOBER 2019