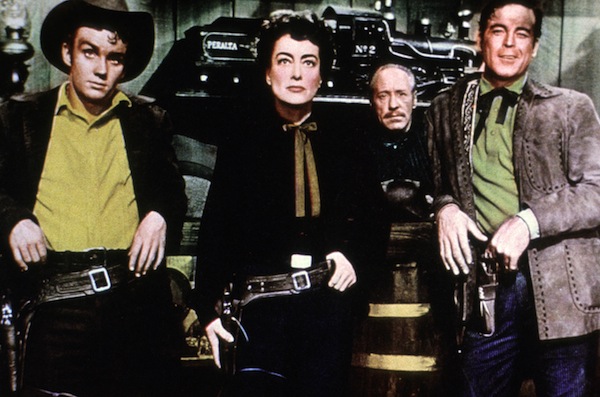 Nicholas Ray saw Johnny Guitar as a first step to independence. Little did he know he would be engulfed in a battle for control of the film with its star, Joan Crawford. She literally had the script re-written during the shoot to please her ego, and to denigrate co-star Mercedes McCambridge who was married to one of Crawford’s former lovers.

Vienna (Crawford), a saloon owner, is nearly bankrupt but she is waiting for the planned railroad to boost her profits. But the townspeople, led by Emma (McCambridge) want her to move on, suspecting her of the murder of Emma’s brother. With her four friends she terrorises the town with a gang led by Dancing Kid (Brady). When Kid’s gang holds up a stagecoach and kills a man, Emma wants to hang Vienna. But she is rescued by her former lover, Johnny Guitar (Hayden), and erstwhile famous gunslinger Johnny Logan. Emma burns the saloon down and after a long chase, Vienna gets her revenge.

The shooting of this cult film with its outstanding colour images by the legendary DOP Harry Stradling (Guys and Dolls) and Peggy Lee’s title song could not have been more problematic. Johnny Guitar was a project for four clients of the Lew Wasserman agency: Roy Chanslor, who wrote the novel of the same name, published in 1953, was the first. He dedicated the book to Joan Crawford, who had just finished her comeback film Mildred Pierce. Script writer Philip Jordan was a front for many blacklisted writers, particularly Ben Maddow, who wrote the The Naked Jungle and Men in War under Jordan’s name. “Just like Wasserman sold film packages, Jordan sold script packages with a guarantee of quality”.  Jordan worked with Ray during 1953 in Hollywood, their script run up to 200 pages, Ray depositing thirty pages with Cinematheque Francaise. Shooting started in mid October 1953 at Sedona, Arizona, where Republic had a Western Street, a permanent set. McCambridge, who played the villain, recalled in her memories “I felt I had a certain edge because a gentleman with whom [Crawford] had had some association, to the degree that she has given him gold-cuff-links, was now my husband”.

When Ray was filming McCambridge in the scene where she addresses the posse to hunt Vienna down, he sent Crawford back to camp. But after he finished the scene, he saw Miss Crawford sitting up on the hill watching. “I should have known some hell was going to break loose”. That night, Crawford asked for “five more scenes”, having strewn McCambridge’s clothes all over the road. As Jordan said, “They were on location, and Joan Crawford decided she wasn’t going to make the picture. They were shooting about 2 weeks without her. So Wasserman called me up and he flew out here.”

According to Ray, Crawford “got some crazy ideas. she said she wanted the man’s role.” Crawford commented: “I’m [like] Clark Gable, [but] it’s Vienna who has the leading part”. She threatened to leave for good, and the picture would have been finished. In this case, Republic might have gone bankrupt because they were used to making films for $50 000 and Johnny had budget of $2.5m.

Jordan had to rewrite the way Crawford wanted it: neither the novel nor the script mentioned that Johnny and Vienna had known each other before. And this way added much more weight to their relationship in the completedfkm. Jordan decided to let Hayden play Crawford’s part with her having the shoot-out at the end, killing Emma/ McCambridge. The 44 shooting days were very traumatic for Ray and as he was directing his next film, Run for Cover, he wrote to his actress friend Hanna Axmann: “The atrocity of Johnny Guitar is finished and released to dreadful reviews and great financial success. Nausea was my reward, and I am glad you were not there to share the suffering”. But there was no pleasing Crawford, in her autobiography she wrote, blaming McCambdrige and lashing out at Ray: “The responsibility lies with an actress who hadn’t worked for ten years [McCambridge had won an Oscar two years earlier]. There is no excuse for making such a bad film”. AS