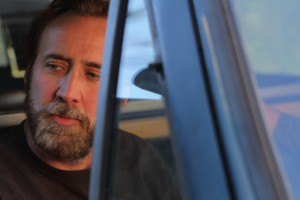 In Joe, David Gordon Green’s bleak exploration of a macho community in hicksville, Nicolas Cage triumphs with a brilliant portrayal of a mercurial but likeable some-time crim who gambles and womanises his way through his days as a lumber merchant.  In contrast to the upbeat and quirky Prince Avalanche, Joe is darker and low on narrative, driven forward by an atmosphere of brooding menace that seeps through the Southern town, keeping the suspense taut with unpredictable episodes of brutal violence.

Adapted from a 1991 novel by Larry Brown, Joe loosely echoes Undertow and tells how a young teenage Gary Jones (Tye Sheridan) manages to persuade the reluctant Joe (Cage) into employing him through sterling persistence and a stankovian work ethic. Once in the job, however, Joe becomes very protective of Gary, whose violent father (a superb Gary Poulter) steals his wages and abuses him.

Unfortunately Poulter never gets to see his debut as he died before the film was released. Womenfolk get short shrift in this neck of the woods, but Adrien Mishler does her best with a slim role as Joe’s on/off girlfriend, who tries to make something of their relationship competing against his regular bouts of drinking, gambling and the demands of his work. Tye Sheridan gives another really excellent performance as Joe’s employee forming a winning partnership with Nicolas Cage along similar lines to the one he successful forged with Matthew McConaughey in Mud. MT