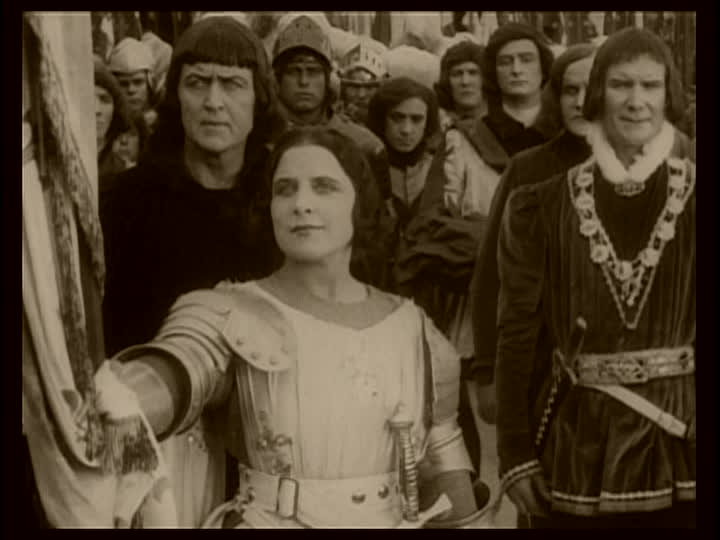 Premiering over a hundred years ago on Christmas Day 1916, this marked the first of the historical epics with which Cecil B. DeMille’s name became synonymous. Joan the Woman far excels his later sound spectacles, by which time he’d lost his enthusiasm for location shooting, his films becoming painfully studio bound, with just a few token exterior sequences left in the hands of second-unit directors. Handsomely designed by Wilfred Buckland and photographed by Alvin Wyckoff, at 138 minutes, it is almost as long as Victor Fleming’s Technicolor folly of 1948 with Ingrid Bergman, but far surpasses it as spectacle.

Imposing a contemporary WWI framing story was probably prompted by Griffith’s Intolerance and pushes the feature over the two hour mark, making it a long even by today’s standards; and the first third of the film drags a bit. The other weak link in the chainmail is Farrar herself. The title ‘Joan the Woman’ (compared to later versions with titles like ‘Das Mädchen Johanna’ and ‘Jeanne la Pucelle’) already seems to acknowledge that DeMille is aware that the 34 year-old soprano Geraldine Farrar looks extremely matronly as Joan (much more so than the 32 year-old Ingrid Bergman in 1948). In the rare close-ups where DeMille has her lit for effect from below, Farrar actually looks strikingly like the 43 year-old Hedy Lamarr in The Story of Mankind (1957). Sadly she also gives possibly the worst performance in the film, constantly playing to the camera rather than the other actors.

However when Joan finally gets into her armour and lays siege to Orléans the film really gets going. The screen positively swarms with extras, some of whom look as if they’re genuinely getting hurt (you can actually see some of them flinching). Joan’s imprisonment and trial also captures DeMille’s imagination and provides him with the opportunity to indulge in one of the torture sequences he developed a penchant for, to the accompaniment of appropriately dramatic ‘Rembrandt’ lighting. Now in the clutches of tombstone-faced Theodore Roberts as Cauchon, the faces of the menacing-looking extras DeMille amassed to fill the courtroom during Joan’s trial are really something; as is her execution, when a flaming orange firebrand is applied to her pyre. Courtesy of the Handschiegl colour process she expires in an eye-boggling blaze of orange flames. @Richard Chatten