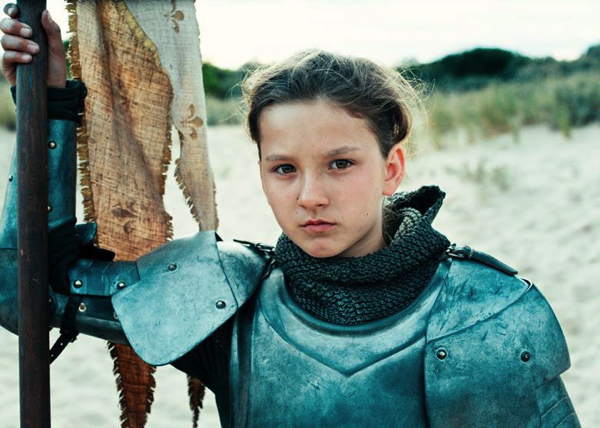 Bruno Dumont follows his musical biopic on the childhood of France’s martyred heroine, Jeannette, with this chronological drama exploring the final years of the Maid of Orléans (1412-31, who became a Roman Catholic saint for her part in reinstating Charles VII to the throne contested by England during the Hundred Years War.

Basing his narrative on the writings of Charles Péguy, his dignified and painterly portrait is suffused with an air of fantasy and opens in 1429 with the same actor Lise Leplat Prudhomme – who was ten at the time – in the title role of Joan. In Jeannette (2017) she was about eight but now now she is has developed into a confident, aspirational teenager with that same air of vulnerability and spiritual purity, not unlike that of Jesus. And Prudhomme is extraordinarily  convincing in the role, exuding a rare maturity. Dumont is clearly both in awe and in love with Joan and determined to clear her name and debunk the myths that led to her burning at the stake as a heretic. The story may be medieval but it still resonates today.

The wildness and clarity of light recalls that of Dumont’s Hors Satan (2012) which was also filmed in the dunes around Pas de Calais near where Joan underwent her trial for heresy. The internal scene takes place in the staggeringly majestic Amiens Cathedral. Dumont eschews the fussiness often connected with historical drama, instead opting for this fresh Neo-realistic approach that allows the focus to rest on the starkly sober message and dialogues between Prudhomme and the cast of non-pros made up of local academics and historians. MT